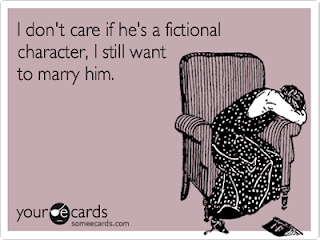 Valentine's Day is coming, and if you happen to be unattached, you may be looking forward to spending some time with your favorite book boyfriend. Hell, I'm even in a relationship myself, and I will probably end up spending Valentine's Day with a book. (Though, this is because we choose not to celebrate, so don't feel bad for me or anything.)

I thought I would take some time to make a list of some of my favorite dudes. These are the guys who make me swoon every time I read, who are just too precious cinnamon-roll-y for the real world, but whom I love all the same.

Note: I fully acknowledge that this post is absolutely heteronormative.

Also note: For any teenaged YA guys that I choose, that crush is coming from Teenaged Me. Or I'm projecting them forward into adulthood. I am not literally imagining mid-30s me with a teenage boyfriend, because that would be Not Okay.

Also ALSO note: Spoiler warnings for all the books listed below.

There were MANY I could've chosen, but I decided to narrow my list down to ten.

Without further ado, and in no particular order:

Gilbert will always, always be my ultimate book boyfriend. He is smart and hardworking. He is not intimidated by Anne's intelligence and strength, but rather, supports her and encourages her to be the best she can be. He is kind, but he is also not afraid to tell Anne when she's being ridiculous. Plus, thanks to Jonathan Crombie, he is so goddamn adorable. And he just loves her so much!! *sobs* (Yes, I will literally say that aloud to an empty room while I watch the movie. HE LOVES HER SO MUCH. That kind of devotion...)


Julian from The Forbidden Game trilogy by LJ Smith 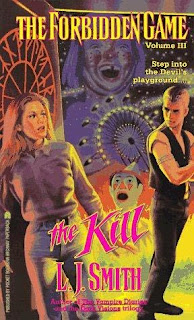 Julian is probably the most problematic person in my top ten, but my teenage heart was so in love with him, and I still have a soft spot for him now, even though kidnapping the girl you love in order to get her to notice you is pretttttttty bad. He's got white-blond hair and electric blue eyes (which I was super-into when I was in high school), and he's a perfect example of the bad boy that the good girls want to save. (And I was very much a good girl as a teen. Well, pretty much, yeah.)


Rhysand from the A Court of Thorns and Roses series by Sarah J. Maas

Y'ALL... you know how much I love these books, and in particular, I love this man. HOLY POINTY EARS, I love Rhysand. If you've only read the first book, A Court of Thorns and Roses, you probably only know him as the beautiful (!!!!) but rather infamous High Lord of the Night Court who has the power to stick his figurative claws inside your mind, but if you've read book 2, A Court of Mist and Fury, then you know that he ends up being SO much more than just the not-very-nice dude who gets in the middle of Tamlin and Feyre. In fact, in one of the greatest 180s in YA in recent memory, it turns out that Rhys is actually Feyre's mate, and he not only fights to protect her, but he empowers her to protect herself as well. He helps Feyre heal from what is an abusive relationship while he too is working through his experiences of imprisonment and rape, all while trying to protect his loved ones and his part of the kingdom. Also, he is frickin' BEAUTIFUL. And he has WINGS. And his squad is the greatest squad since the Order of the Phoenix.

There were soooooooo many SJM book boyfriends to choose from, but if I had to choose only one, it would be Rhys, hands-down. See? I even wrote the most about him.

Again, there were MANY dudes I could've chosen from among Jane Austen's books, and I know most people would automatically answer "Mr. Darcy," but to be honest, Tilney has always been more my type of guy. He's sweet, he's smart, he's funny, he's a reader... he's not particularly dashing or dreamy or heroic (in terms of paying off scoundrels with large sums of money to protect the family of the girl you love), but he's just... a really cool guy, and he makes me laugh with his cleverness, and I've always found him so appealing in a real-life sort of way.


Atticus Finch from To Kill a Mockingbird by Harper Lee 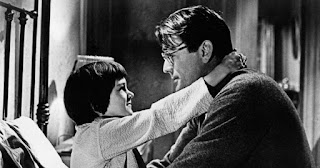 I admit, this choice is heavily influenced by Gregory Peck's portrayal, but as a grown-ass woman, I would totally want to marry a man like Atticus Finch - he's a family man, he's well-respected, and (considering the historical context) he's basically woke. He's a good man.

Four from Divergent by Veronica Roth 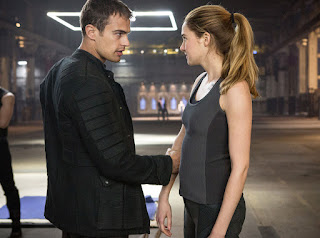 I'll admit I liked him less as the series went on, but in the very first book, Four (aka, Tobias Eaton) is sooooooo dreamy (especially with Theo James as his face). He's a tough guy with a troubled past, but he sees Tris' inner strength and he is drawn to her. He's not a bully like some of the other Dauntless, because his bravery also stems from his Abnegation instincts.


Ezra Mason from Illuminae by Amie Kaufman and Jay Kristoff

This is one of my favorite books as well, and I just adore Ezra. He's not perfect, but he's super funny and even though the biggest portion of the heroic action in the book goes to girlfriend Kady, Ezra is kind of awesome in his own right. In addition to a pretty hilarious drunken face-keyboard-smash email, he is also responsible for one of my most favorite swoony quotes ever: “You have me. Until the last star in the galaxy dies, you have me.”


Lord Maccon from the Parasol Protectorate series by Gail Carriger

Conall Maccon is an alpha werewolf, and what I LOVE about him is that, given the context of the series (steampunk), HE'S the overemotional one in the relationship, not his wife. It's such a subversion of the "hysterical female" stereotype. But yeah, if you're going to fall for an alpha male type of man, why not be quite literal about it?


Augustus Waters from The Fault in Our Stars by John Green

What I really, really love about Augustus is that he is great with words. I mean, yeah, I know that's more of a John Green thing, and lots of people would argue that the average teen boy does not say things like “You are so busy being YOU that you have no idea how utterly unprecedented you are," but COME ON... how can you not swoon upon hearing something like that? And he immediately decides to read this book because the girl he likes says it's her favorite, and he gets really into it and even uses his Wish to take her to Amsterdam to meet the author, and COME ON!!! How do you not love a guy who's willing to bond with you over your favorite book? SIGH.


Dimitri from the Vampire Academy series by Richelle Mead

Not gonna lie, I don't blame Rose Hathaway one bit for chasing Dimitri, even though he's like, ten years older than she is, and she's still in high school. I mean, as an adult looking in on the situation, I find it highly problematic, but if I were still a teenager, I'd be like, OMG SCORE. But luckily, Dimitri is strait-laced and honorable, and though he's definitely attracted to her, he has a very strong sense of duty and self-restraint.

And then of course things get REALLY interesting when he essentially turns Angelus later on in the series, and then it gets even more problematic, but... Sigh. I can't help it. This hot Russian guardian makes me swoony.

-----
So yeah... there were definitely more guys I could've chosen, many of whom would make TERRIBLE boyfriends in reality (like Kaz Brekker from Six of Crows/Crooked Kingdom), but as far as book crushes go, these are my top ten.