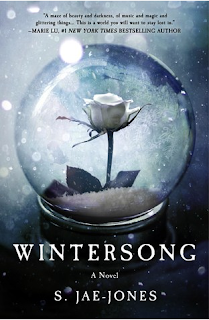 Summary: Liesl has always been the plain, overlooked Vogler child - her younger sister, Kathe, is the golden-haired, beautiful child, while her younger brother, Josef, is the violin prodigy. As the oldest, she is saddled with responsibility and duty, and the only things that have brought her joy her entire life are composing music and hearing about the legendary Der Erlkonig, or the Goblin King.

But he's not just a legend - when he kidnaps Kathe, Liesl must follow him to the underground to rescue her. And when it turns out that the price of saving her sister is to give up her own life to become his bride, she pays it.

Now the Queen of the Goblin realm, Liesl finds a delicious freedom that she has never experienced before as a mere human. But even that comes with a price.

It took me a while to get into this book, whatwith the German folklore and all the musical terms (I have a background in music, but it's been ages since I've played), but once the story got its hooks into me, I didn't want it to end. Which is not unlike what happens to Liesl in the story.

If the summary sounds like a retelling of Labyrinth, it's probably not a coincidence. But even considering David Bowie's breeches, Wintersong is sexier. I'm sure we all remember the ballroom dancing scene in the movie where it's pretty clear that Jareth wants Sarah for a bride, and Wintersong is kind of like our much-needed alt-universe version of the story where she actually does stay, thus living out every Bowie-obsessed teen girl's dream.

I should say, though, that Wintersong isn't TRYING to be Labyrinth, but rather, they draw from the same mythology, and that's why there are similarities. (I don't know much about the figure of the Erlking, but the one time I did read about it in a YA book was LJ Smith's The Forbidden Game trilogy, and it was much the same - a seductive, ageless male figure who kidnaps a girl to make her his bride.) Although, this Goblin King does have two different colored eyes :)

*Edited to add* Here's a blog post from the author talking about how Labyrinth inspired this book.

But anyway, I do kinda feel like this story is the answer to "What if she had stayed?" and OH BOY, I was not disappointed. Der Erlkonig is mysterious, sexy, and seductive. You know how there are some book dudes you have crushes on because they seem like precious cinnamon rolls who are just such wonderful, kind, good men (some of whom I mentioned in this post)? The Goblin King is not one of them. HE'S one of those characters whom you love even though you know he'd probably be soooooo bad for you. (I did also mention a couple such characters in that post, but I will also add The Darkling from Leigh Bardugo's Grisha trilogy as well.) He's the sort of character who should scare you, but he also teases you with the promise of a wild, heady, raw sort of love, the kind that leaves you reeling and dizzy.

There are many reasons why Liesl decides to stay, one of which being that, as the plain, forgotten child (well, she's 19 years old), she constantly feels ignored and undesirable. And the Goblin King changes that - he desires her, and awakens her desire. One of my favorite parts of this story is when she throws out a statement about herself being "unlovely and queer" ("queer" in this case meaning strange, as opposed to referencing sexuality/gender identity, because according to the author, this story takes place in 18th century Bavaria), and he actually doesn't counter her statement by telling her how beautiful she is. And I liked that a lot - I've read enough books where the female protagonist describes herself as plain or "nothing special," perhaps as a way to appeal to the reader or give them someone to relate to, only for the reader to find out from basically everyone else that she actually IS stunningly gorgeous. For those of us who aren't stunningly gorgeous, that character suddenly becomes a whole lot less relatable. (I always get this feeling of like, "Aw, she's not one of us after all.")

So instead of trying to reassure her about her looks or whatever, he tells her that he doesn't care about her looks - that it's her fire, her passion, that draws him to her, and her music as well. It's refreshing to find a story where physical beauty isn't the draw, in this world where everyone constantly told to be beautiful.


“There is music in your soul. A wild and untamed sort
of music that speaks to me. It defies all the rules and laws you humans set upon it. It grows from inside you, and I have a wish to set that music free.”

It's a heady, dreamy sort of story, and I felt a little bereft when I reached the ending, to be quite honest. I wasn't ready for it to be over.
4 stars fantasy S Jae-Jones YAF