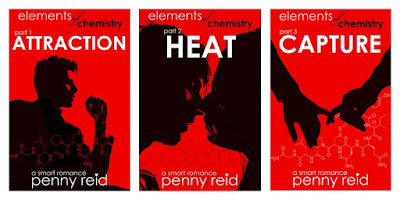 Summary: Kaitlyn is the queen of hiding and being invisible. Despite being the daughter of a senator and a college professor (and her grandfather was an astronaut too!), Kaitlyn prefers to pass through life unnoticed - she avoids parties, she wears baggy clothes, and she doesn't really talk to anyone at her school except her best friend Sam and her lab partner, Martin. Her very hot, very rich, very cocky, very a-holeish, even, lab partner, Martin.

Kaitlyn is literally hiding in the cabinet in the chemistry lab (as she often does) when she overhears two other students plotting against Martin, and when she warns him about it, she realizes that she hasn't gone unnoticed after all - at least, not by Martin. What follows is a whirlwind romance that begins with a spring break trip to remember, where Martin exposes her to a different type of chemistry.

Thoughts: This series was a riot! It's not often that I come across a romance book that is a pleasure to read separate from, you know, the parts about pleasure. Kaitlyn is that type of person who is incredibly intelligent, with a brain for facts and vocabulary, but has trouble picking up on emotional and social cues or sometimes takes things too literally. She's straightforward and matter-of-fact, and it's clear why she does so well with science but not so well with people and socializing and relationships.

The absolute best thing about this series is her voice, and it's one that I almost never get to see in new adult romance. She's got a giaaaaaant vocabulary, and she's kind of a nerd (there is a whole discussion about Lord of the Rings in here), and she is funny without meaning to be. At one point, while attempting some dirty talk with Martin, she says:

This entire series is full of her super-hilarious comments that are just cringeworthy-awkward, but she's written with a lot of heart, so she's not totally clueless or frustrating or irritating. That said, she (as well as Martin) have their flaws, and I think they (and through them, the story itself) do a great job of calling each other out on their missteps. He's not perfect, and she's definitely not perfect, but they are super fun to read about as they learn and grow from each other.

One thing that I really appreciated is the fact that, because Kaitlyn is so smart and her mother is a senator who is very strong and very accomplished, Kaitlyn worries a lot about her feminism and what it means for her to be with Martin and how she can reconcile her feelings about sex and desirability with her feelings about female independence and the male gaze in general. Like, she goes back and forth about this a lot, in a good way, and it's not something I ever see romance novel ladies tackle head-on, and her inner struggles about it are so real and so human. This quote was a must-highlight for me:


It was the first time I’d used my sexuality for anything…ever. I was so used to relying solely on my brain. Exploiting my femininity was kind of fun. Who knew?

Of course, this thought was immediately followed by guilt. My guilt reminded me that the generations before me—like my mother—had worked tirelessly to free women from the bonds of sexuality as the primary source of female importance.

Women were more than the status of their hymen or their dress size.

Then my sexuality bitch-slapped my guilt. Then my guilt sucker-punched my sexuality. I mentally took a step back, leaving them to fight it out amongst themselves, like a giant squid and a sperm whale in the depths of the ocean.

I mean, I guess what it comes down to, is that we aren't just told that Kaitlyn is smart and awkward... we see it for ourselves through her narration. This series is subtitled "A smart romance," and I can definitely get behind that, because it's all there, plain to see. And she's incredibly relatable and incredibly human and incredibly entertaining.

The third book of the trilogy is a little more frustrating, because of all the miscommunications and missed cues, but in the end, I can't help but root for them, and I was sorry the story ended. I finished all three books in a span of 24 hours, if that gives you any indication of how much I liked them, and I will be checking out Penny Reid's other books soon. (And I saw in her bio that she's a knitter on Ravelry!!!!)

Bonus points: I wouldn't be embarrassed to be seen reading these books, because the covers are simple and tasteful.
4 stars adult Penny Reid romance/erotica