A Court of Wings and Ruin by Sarah J. Maas 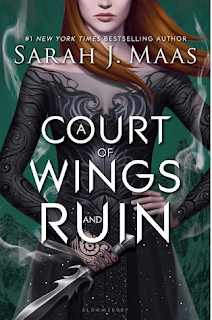 Summary: This is book 3 of the ACOTAR series; therefore, this review contains spoilers of the first two books. You have been warned! You can click to read my reviews of A Court of Thorns and Roses and A Court of Mist and Fury.

At the end of the last book, Feyre, who has been made High Lady of the Night Court, is taken back to the Spring Court by Tamlin, who sold out his own people to the King of Hybern to get her back. In addition, Tamlin's priestess Ianthe had sold out Feyre's sisters to the King as well, and Feyre had been unable to save them from being changed into Fae by the King.

So now she's in enemy territory, forced to pretend that she is no longer connected to her mate, Rhysand, so that she can gather information and bring down the Spring Court. And that's only the first step in a long and brutal battle to protect all of Prythian and the humans who live in the bordering territory.


Thoughts: HO. LY. GODDDDD! I thought I was ready for this book. I've been counting down the days since I finished the ACOMAF (and you KNOW how much I love that one!), and when ACOWAR finally hit my Kindle on Monday night, I launched into it, pausing only to attend a book signing by THE QUEEN HERSELF (more on that later) and to pass out from sheer exhaustion. It's been less than 48 hours since I started it, and oh my god, I feel like I don't know what hit me. I was NOT ready for this book. And I definitely am not ready for this to be over.

(Okay, look - this is not much of a review, in the sense that I am TOTALLY BIASED about this series, so... if you're looking for objective analysis, you're not going to find that here. This will be mostly fangirl squeeing. #sorrynotsorry)

I will discuss spoilery stuff way at the bottom of my post, so that I don't ruin things for you if you haven't read it yet. Here's what I can tell you:


I do feel like this was a wonderful ending to this trilogy. I was a bit worried, considering how much I loved ACOMAF, that this book wouldn't be able to top it, and it would end up disappointing me somehow, but NOPE. It just about blew the hair off my head. I don't know that I will reread this one as much as I've reread ACOMAF, but that's only because it's so harrowing, and I can only put my heart through that much stress so often.

In the end, I really have to say that this is probably my second favorite book series, ever, behind Harry Potter. It is THAT good. Just.. everything - the character arcs, the action, the romance (and yes, the sex), the feminism (from the men as well as the women), the handling of PTSD/depression/sexual assault/abusive relationships, the incorporating of fairy tales and various mythologies... the entire universe. I think I have grown to love this more than Throne of Glass even (and you know I love that one).  I was happy with how things turned out, but sad that it was over, like saying goodbye to beloved friends.

MY ONE AND ONLY DISAPPOINTMENT about this book is that they had to print it on super, super thin paper (like Empire of Storms) so on my shelf, it's thinner than ACOMAF, when it's actually 70 or 80 pages longer. It just doesn't look right.

Before I get into the spoilery parts, here are some pictures from last night's event at Powell's! (Don't worry, I'll put a spoiler buffer below these too.) 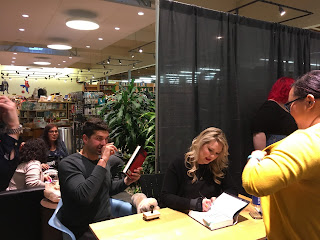 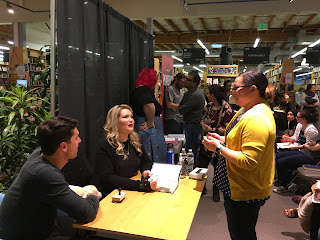 Dude, MR. MAAS is quite the looker himself. Basically, SJM is young, beautiful, talented, creative, funny, down-to-earth, and has a hot husband. QUEEEEEEEN.

Also, I now have the entire trilogy signed. Well, technically, I got ACOTAR stamped, but it's because SJM has had wrist issues lately, so we were limited to one book hand-signed and one book stamped, AND it was stamped by Mr. Maas himself, right beside her, so IT COUNTS AS SIGNED. 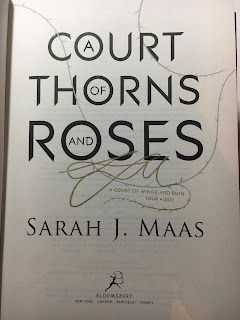 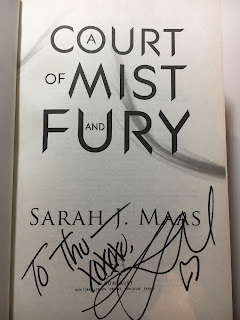 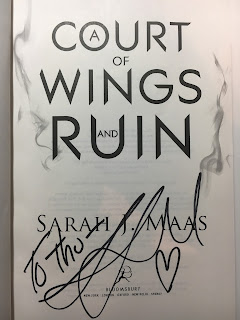