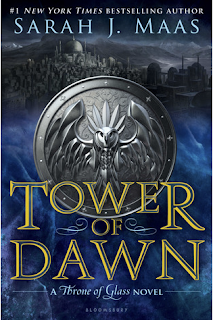 Summary: This is book... 6? 5.5? of the Throne of Glass series. Therefore, it will contain spoilers for all the previous books. If you would like to check out all my previous TOG reviews, please help yourself :)

You have been warned!!!

If you haven't read the series in a long time and need some refreshing, I would definitely recommend rereading "The Assassin and the Healer" from Assassin's Blade, as it introduces the character of Yrene Towers (one of the main characters in Tower of Dawn) and maybe also Queen of Shadows, which takes place right before TOD.

So, at the end of QOS, we have a small parting of ways. After the destruction of the glass castle in Rifthold and the subsequent revelations about Erawan and the greater threat to the world, Aelin and her crew (Rowan, Aedion, Lysandra, and eventually Dorian and Manon) go off on their way as shown in Empire of Storms, while Chaol and Nesryn head to the Southern Continent to see if they can drum up some allies for the war and to see if the healers at the Torre Cesme can get Chaol walking again after his spinal injury.

Thoughts: Thus, this is Tower of Dawn in a nutshell. A very SMALL nutshell, because this book ended up being so much more than just "the Chaol book," though I was already on board for that too. There are a few references to the events of EOS kind of sprinkled throughout TOD, I guess to give you an idea of how the two timelines line up. I'm not going to lie-- when we later hear about Aelin "walking away" from the Maeve confrontation, I definitely got SUPER sad.

I'm not sure how this would go if you were to read TOD before reading EOS. It would still make sense, I think. I can't recall anything that you would NEED to know from EOS in order to understand TOD, but I do think that if you're not reading super carefully, then the last chapter of TOD, which actually checks in with Aelin after the ending of EOS, will be kind of a rude awakening. (Which I guess would be really great motivation to finally pick up EOS COME ON WHAT ARE YOU WAITING FOR!)

Okay, so to back up a bit: You know I've heavily favored the TOG series for a long time, and it wasn't until ACOMAF came out and really sank its claws into me that I started kind of leaning towards that series instead. That doesn't mean that I've totally cast aside TOG--I just think I've realized that what won me over so heavily was the character development of ACOMAF. I've always been way more interested in "character stories," seeing how people change as different things happen to them, experiencing their revelations, etc., than I have been in straight-up action. It's why I loved ACOMAF so much more than ACOWAR, and it's also why I especially felt less impressed (NOT unimpressed, but just less impressed) by EOS, which was the next book after two heavily character-important installments (HOF and QOS, my two favorites of this series) and which also came out a few months after ACOMAF. (God, these acronyms! ACRONYMS EVERYWHERE!) I loved EOS, but I didn't love it AS MUCH as the previous two books in the series and ACOMAF. Which is not to say that there isn't character development, but it's a very action-heavy book. (Also the end of EOS was way too similar to ACOMAF, so I was like, "Really? Again?")

TOD has action, of course, but I love-love-loved the character development. Yes, this is Chaol's story, but it's also Nesryn's story, and Yrene's story, and the story of an entire different nation of people who have been there all this time, existing while s*** was going down in the Northern Continent. I can understand why SJM ended up writing WAY more than she planned, and I'm so glad she did--this was a very rich world she built, and I loved reading about it.

I know it didn't sit right with many people how things went sour between Chaol and Aelin when she came back from Wendlyn in QOS. I understand the diehard Chaolaena (is that right?) shippers, but to be honest, I thought it made perfect sense, given what Chaol experienced while she was gone and given the sort of man he already was, that he would be more than a little resentful of Aelin once she returned. Chaol is a man who is loyal, has always wanted to do right, who still believes that doing good leads to good things. He was the stalwart one who kept a straight face until he fell so deeply in love with Celaena that he couldn't help it anymore; he wasn't the smooth ladies' man sneaking kisses the way Dorian did, and he definitely wasn't Rowan, the stone-faced warrior who (like Aelin) isn't above inflicting a little pain if it gets results and (also like Aelin) has a lifetime of pain bottled inside of him as well. Chaol really sees his beliefs tested, is carrying a lot of guilt over the deaths of Nehemia and Sorscha as well as Dorian's imprisonment, has lost everything he holds dear (his best friend, the girl he loves, and his honorable standing), and is now on the lam as he fights against the kingdom to which he had sworn his loyalty. It's no wonder, then, that he's a weeeeee bit bitter about Aelin swaggering back to their shores, appearing no worse for the wear (keyword: appearing) and with her new Fae prince beau in tow. For all they went through, she came out smelling like roses, and Chaol had his life completely upended. (In his point of view, of course. We readers know that Aelin went through hell.)

Those two crazy kids do manage to get their s*** together by the end of QOS, and she does technically save his life, but he manages to lose one more thing, one very important thing: himself. Or, at least, his body. Chaol the soldier, who could always rely on himself and his body if nothing else, finds himself in a wheelchair after the end of QOS, and no matter how much he might insist that he and Aelin left things on a good note, this whollllllllllle ordeal is bound to leave scars, and not just physical ones. And I'm so glad that this gets dealt with in TOD.


MILD SPOILERS IN THE PARAGRAPH BELOW!!!!!
.
.
.
My favorite part of all of TOD is the climactic moment when Chaol REALLY confronts his feelings about Aelin, as well as himself, because before that moment, I never really saw how TRULY under-his-skin she was. To me, they had a tragic romance, but it did lead to Aelin finding her mate, so yeah, all was well and good. It wasn't until I got to this scene in TOD that I realized the extent to which Chaol loved her (which we got in COM, but not like THIS), and the extent to which his heart was broken a million times over, as well as the extent to which he feels responsible for so many of the bad things that have happened. WOW. And as I've never stopped loving Chaol, I'm so glad he is able to finally find happiness and peace in this book, because he truly is a good guy. He's just been through a LOT.
.
.
.
END SPOILER SECTION!!!!!


And of course, I haven't even begun to touch upon Nesryn, Yrene, and the new characters (and creatures!) that TOD introduces. To be honest, I don't know how to without spoiling things, but here we go:

Nesryn is a fascinating character. At first we know her (in QOS) as "the other woman" Chaol occasionally sleeps with but doesn't QUITE want a relationship with, especially after the intensity of his relationship with Celaena, and you know, I gotta feel bad for her. She's not even the rebound girlfriend; she's the rebound friend-with-benefits. But she's okay with this arrangement too, so I don't feel quite so bad, and also, she's a badass archer. "BUT SHE DESERVES BETTER!" I say.

In TOD, she's the new Captain of the Guard for Adarlan (taking over Chaol's old post), and now she's also the biracial, bicultural head soldier for the empire that has been known for being cruel and corrupt towards foreigners, especially those from the Southern continent (which her father is). To the random stranger, she appears to be... you know, that type of woman who seems to be okay with working for a rampant misogynist, or that type of POC who seems to be okay with working for a total racist. (There are many terms for this.) Granted, she always was a soldier in the Adarlan army, had worked for them while they were still under evil control, but reputations have a way of sticking, and even though Dorian is now the King for whom she is the Captain, it still... kinda looks bad. Especially since she is in the Southern Continent for this book. She does get asked about this by other characters in the book.

So these are two interesting positions that Nesryn is in. She's made this huge journey to help a man who really only just recently made any kind of romantic commitment to her whatsoever, and to help a country that until now was guilty of persecuting her people.

What I love about Nesryn in this book is that she HECKA (yep, I said it) stops being in ANYONE's shadow (Aelin's or Adarlan's) and really gets to shine in her own right. I love that we finally get to see her in all her true awesomeness. (Again, trying to avoid being too spoilery!)

Yrene is an interesting foil to both characters in this book, but she is far from being merely a foil. She's a healer, one of a relatively small amount of people who have been blessed with healing magic, and she also happens to be one of the most talented healers at the Torre Cesme (the academy/center for healing in the South Continent). As she debates her own conflicted ethics about helping Chaol (because it was Adarlan soldiers who burned her mother alive when Yrene was 11), we start to see that she's got a much bigger role to play in this story than just getting Chaol to walk again.

Actually, we get some PRETTY INTENSE revelations by the end of this book. If you're not sure whether you want to read TOD or not because maybe you only care about Aelin & crew or something, I would urge you NOT to skip this one because there is some pretty key information that you might want to know before heading into the last book. (The last book!!!! *sobs*) I definitely did NOT see some of this coming, although the nature of the information makes me wonder if SJM had always planned this plot point, and now I want to go back and reread for clues, and...

ALL THIS TO SAY, that this final installment coming out next year is going to be pretty friggin' epic. I'm already anticipating the book hangover.

TOD was awesome, in a different way from the other books in the series, and I liked it way more than I thought I would. Read it, friends.
5 stars fantasy Sarah J. Maas YAF