A Thousand Letters by Staci Hart 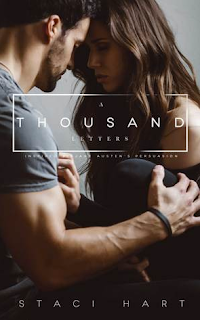 Summary: Seven years ago, Elliot let the love of her life walk away, and she's regretted it ever since. She has always known that Wade was The One, but she was too young at the time to make that kind of promise, and as a result, she hasn't heard from him since the day they broke up.

Wade is back in town after seven years of running from the memories of the girl he loved, but under the worst of circumstances: his father is dying. So now, not only is he having to deal with being strong for his sisters, but he also has to face Elliot, and the very real possibility that his feelings for her are as strong as ever.

Thoughts: This book is advertised as being inspired by Jane Austen's Persuasion, and I thought Hart did a pretty magnificent job of updating the story for modern times. I like the choices that she made, and why she made them. In the original, it would've been foolish for Anne to marry Wentworth when he had originally asked, and not just because of their age. In this update, Wade is enlisting in the army, and the issue is not so much fortune, but the idea that Elliot would be leaving behind her entire life for the very real possibility that Wade might not survive his first deployment.

I also liked that we get "Wentworth's" point of view in this book, in the form of alternating narrators. And that he's flawed too. It made sense that Actual Wentworth would've gone 9 years without talking to Anne, because it was just that much harder to keep in touch with people in those days. In our modern times, what's more likely to keep people apart? In this case, it's Wade's own stubbornness, his inability to see Elliot's point of view, and of course, the trauma that comes with being a military man. He switches a lot between blaming Elliot for letting him go in the first place and also being convinced that all he could offer her is a broken shell of a man who has taken lives for his country and has watched his friends die.

Elliot's family is particularly awful, and they are great updates of their Austen counterparts as well. I'm not going to spoil anything further, but I really thought this book was well done.

Apparently there are a couple other Austen retellings that Hart has written, and now I'm eager to check those out. She hasn't tackled P&P, and I know that the market is absolutely saturated with P&P retellings, but honestly, after reading this one, I'd be curious to see what she can do with that. I definitely enjoyed this one.
3 stars adult Jane Austen romance/erotica Staci Hart