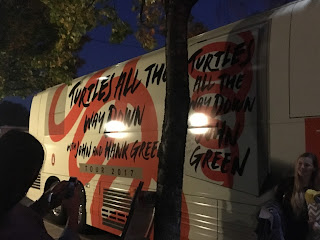 I've been SUPER excited about this for WEEKS, if you couldn't tell by my uber-capitalization and excessive use of exclamation points!!!! The only bummer about this was that there wasn't actually a signing where we could've met the Green brothers, but hey, we all got a signed copy of the book (and swag) included with admission, so... I'm not complaining all that much. 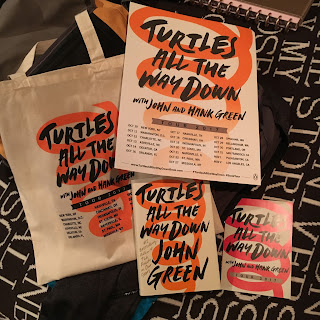 You guys, you have to know how much this means to me to even be in the same room as John Green. He's not just the author of my #4 favorite book of all time (TFIOS); he's one of my favorite HUMAN BEINGS (that I don't personally know). I know it's dangerous to put people on pedestals, but he's one of the few famous people in the world I would feel even remotely comfortable nudging in the general direction of the proverbial pedestal. As a book lover, as a media consumer, and as a teacher, I am so heavily influenced by Green's words and ideas. I am a major, major fan.

I've seen Hank live before, but those were concerts. (Awesome concerts, though!) This was my first ever John Green book event, and it did not disappoint. We started off with the man himself reading an excerpt from TATWD, and speaking candidly about his own experiences with OCD and depression, and how they shaped him and this book. He was heartfelt and sincere, and I found myself tearing up at various points throughout the show. John Green never fails to make me cry :)

Then Dr. Lawrence Turtleman came out to explain taxonomy and phylogenetics and tuataras. (There's a tuatara that features prominently in TATWD.)

Followed by Q&As with John by himself as well as him with Hank, a la their podcast, Dear Hank and John.

And yeah, all my pictures are blurry and dark and from far away, but we also got some musical performances from Hank, including the very end, where he AND John (and all of us) sang one of John's favorite songs, "This Year" by the Mountain Goats. That was a very, very cool moment. I know there were like, a thousand of us there or whatever, but basically, I SANG WITH JOHN GREEN :)

And this evening just further impressed upon me what genuinely awesome people they are. They are smart, and they are funny, but they also care a lot about making the world a better place (decreasing world suck), and I loved that feeling of being one with everyone who was there with me.

We weren't just people seeing a show on stage; we were a community. It was wonderful to feel that way. <3
authors in person John Green