Hold Me by Courtney Milan 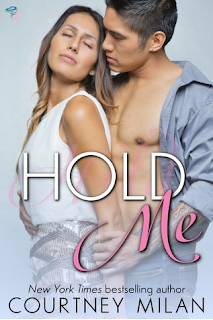 Summary: Maria Lopez and Jay na Thalang are sworn enemies from the start. Jay, a professor at Berkeley, assumes that beautiful, glamorous Maria is a fake, shallow dolt; Maria, rightfully, thinks he's sexist and elitist. Every encounter between them after their first meeting is ferocious and full of fire.

Unbeknownst to either of them, they actually get along really well--online. Maria runs a popular blog, and Jay is one of her biggest fans, and for the past year and a half, they've been communicating under pseudonyms, Em and A. Their friendly messages have turned into flirtation, and their flirtation is slowly turning into love.

As sparks fly (not always in a good way) between Maria and Jay, Em and A grow closer. But eventually the truth will come out. Which version of their relationship will prevail?


Thoughts: This is perhaps the BEST book of its genre that I've ever read. I'm not even kidding.

I've always been a sucker for character-driven stories (as opposed to plot-driven ones), and not only was this book right up my alley, but it is SO well-written, and each of the characters themselves is so wonderfully fleshed out.

Let's get this out of the way first: Jay is a total a-hole to Maria for most of the book. Just a total, unequivocal a-hole in exactly the way you'd expect: as a chemistry professor, he thinks he's a good person because he has female grad students in his charge, he's co-authored publications with colleagues, etc, etc, but when it comes to Maria, he judges her instantly based on the fact that she wears makeup and heels, likes to take selfies, and talks to her brother about Taylor Swift. He is AWFUL to her, and thinks he's totally justified because she is "that brand of girly-girl," and as a serious scientist, he's above all that.

Maria is absolutely right to push back. And she REALLY lays into him, on MANY occasions. She points out how his attitude is elitist and sexist: "You're a goddamned professor. If you assume your female students who care about their appearance don't know math, you're doing them an incredible disservice." And even when they are communicating as Em and A, she doesn't cut him any slack. After the above exchange, A messages Em looking for some sort of cookies, some reassurance that he's not actually a sexist jerkface, and she doesn't bite. I LOVED THAT.

I have to say, the whole reason why I started reading this series was because I was complaining about romance novels where the guy says something worshipful about how the girl he loves barely wears any makeup and she's so "natural," I guess, in comparison to women who like to wear makeup and dress up a little. It's BS; I think people should be able to wear as much or as little makeup as they want to, but it doesn't make them better or worse people than anyone else. So I hate this whole "makeup shaming" thing that comes up sometimes in romance novels, where the "good girls" are just so naturally gorgeous and pure and innocent (until they get in bed with the guy), and then all the women who are jealous, drama-filled, catty biatches are caked in too much makeup and always dress really slutty too. IT DRIVES ME MAD.

Maria tells him, "I am a girly-girl. I love heels. I do my hair. I watch makeup tutorials on YouTube, and I do a better smoky eye than you could dream of," and that none of this justifies his treatment of her (or anyone who doesn't understand math as well as she does). But this isn't just a mere defense of femininity as a choice--it's important to note that Maria is transgender. I'm not going to claim to know what it's like to be transgender or that I'm an expert on trans issues (because I'm absolutely not), but from what I do know, for many trans women, passing is not just a goal, but a matter of life and death. (Note: there is not a whiff of trans panic in this book, and I'm glad that the story didn't remotely go there.) This isn't a story about Maria's journey as a trans woman (though her struggles are alluded to throughout the book), but it's important to note that this isn't just any "Hey, women should be able to wear what they want" stance on feminism. Maria isn't just proud to be a girl because she likes eyeliner; she had to fight to be able to express herself. It adds a layer to the story.

In my review of Trade Me, which was book 1 in this series, I pointed out that Tina (the main character) is Chinese, but that wasn't the source of conflict in the story. Like, her cultural heritage is part of who she is, but it's not EVERYTHING that she is, and I appreciated that. Likewise, Maria, too, is a well-written, well-rounded character, and the story doesn't hinge upon her gender identity, but it doesn't ignore it either. (JUST LIKE IN REAL LIFE, HUH?)

Jay is a very interesting character because he does in fact have a loooooong way to go. There are particular reasons why he behaves the way he does, but once he realizes the error of his ways, he apologizes, and he tries to be better. If only that happened more in real life. I won't go into details (because spoilers), but let's just say that Jay definitely redeems himself and works to earn Maria's trust. This is NOT a case of "Oh, he's a jerk, but that's okay, I'll just accept it and try to change him." NOPE. He is a jerk, but HE changes himself, and then things get better from there.

There are only two books and a short story (which I also loved!) in this series so far, and I'm really thinking that this is probably one of my top favorite romance series. I think that this series is something that I've been searching for for a really long time: nuance, DIVERSITY, intellect, humor, warmth, and a healthy dose of social issues. And of course, romance. :)

I highly, HIGHLY recommend the Cyclone series so far, and you can bet that I will be devouring book 3 as soon as it comes out.