Trade Me by Courtney Milan 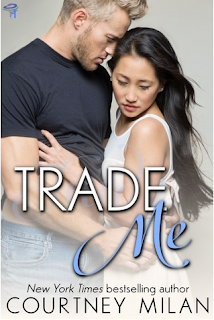 Summary: Tina Chen has about fifteen dollars left in her bank account, and no time for any foolishness. She just wants to get her degree and become a doctor so that she can help take care of her family and their bills.

On a particularly bad day listening to privileged college students complaining about welfare and EBT, Tina loses it--on Blake Reynolds, who happens to be the son of the CEO of the Apple-like corporation, Cyclone Industries. She bets him that he wouldn't last one day with her life, and he takes her up on it: they will trade jobs, houses, salaries, responsibilities, etc. for the rest of the semester.

But things aren't exactly as they seem, as each discovers the difficulties of each other's lives. As Tina and Blake get to know each other, they realize also that their chemistry is too strong to deny, and that perhaps, each might be what the other needs.


Thoughts: So, you probably know that I read a crap-ton of romance novels, and half of them don't end up getting reviewed on this blog because sometimes they're just not that remarkable.

Trade Me was strongly recommended to me by another member of a book group I belong to, and when I saw the cover, I instantly squealed. "ASIAN PEOPLE!!!" I clapped my hands. Not that there aren't romance novels involving Asian people, but I could tell from the press summary that while it had an Asian female lead, it wasn't being marketed as an interracial romance (meaning, that wasn't the focus) and that the story didn't center around their cultural differences. Like, this is NOT a story of "HOW WILL THE WHITE DUDE AND THE ASIAN LADY UNDERSTAND EACH OTHER???" It's not that.

It is, however, a story about class differences, and the cultural differences are there too, but insofar as they intersect with issues of class. Tina's story is not an uncommon story among immigrants/children of immigrants. (She came to the US when she was six.) And it's presented SO well, I thought. This story has nuance and complexity, and it's probably the best portrayal of that duality of Asian-American life that I have ever seen in a book that isn't, like, The Joy Luck Club. I mean, not to badmouth romance as a genre, but I've never seen a romance book that did such an amazing job of this.

Yeah, we can roll our eyes that Tina is an Asian girl who works hard and wants to be a doctor, but she's far from a stereotype. For one thing, she's quick-witted and sharp-tongued, and I cheered for her absolutely when she lights into Blake at the beginning of the book. I FELT her internal debate of "Do I speak up and sound like an oversensitive whiner, or do I keep it to myself but feel like I'm betraying myself and my people in the process?" I go through this CONSTANTLY.

And Blake, to his credit, is not a jerk. He's naive in some ways and definitely privileged, but I appreciate that he has a willingness to learn, and that he has his own demons to fight as well.

And I can't talk about this book without talking about the amazingness that is their parents. Blake's dad is a full-blown a**hole, but he's not without his depths and redeeming qualities. And Tina's parents--Okay, first of all, I am so glad that this author didn't write them speaking broken English. I don't know anything about Courtney Milan or her cultural background, so judging purely from her author photo, I can't tell if she has any Asianness in her heritage. I get annoyed sometimes when non-Asian authors write Asian characters speaking broken English, whereas sometimes I will excuse it from Asian writers, and it's the whole "You're not one of us" thing. Like, it's one thing if I make jokes about my family, but it's another thing entirely if someone outside of my family does, you know? So when I read non-Asian authors writing Asian characters in broken English, I have no clue if they're actually striving for authenticity, or if they just think all older Asian immigrants ARE that way, or what. I don't know what your intention is, you know what I'm saying?

So, I don't know Courtney Milan, but I appreciate that she made Tina's parents as interesting and nuanced and human as she did. While also making them realistic--when Tina gives Blake the speech about how Chinese people won't talk about certain things that American people do, and conversely, WILL just talk about certain things that Americans are too polite to mention, I was like, "YES. THIS IS TRUE." (In my experience as a Vietnamese person, I mean.) But Milan, it seems, was very careful not to make Tina's parents cartoony, and I love her for it.

Anyway, can you tell I loved this book? I LOVED THIS BOOK. I am definitely reading the next one.
4 stars adult Courtney Milan romance/erotica