Days of Blood and Starlight by Laini Taylor 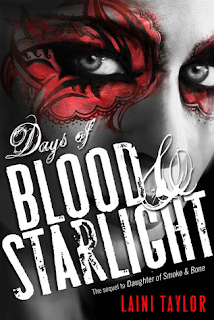 Summary: This is book 2 of the Daughter of Smoke and Bone trilogy, so this will contain spoilers for the first book. To read my review of book 1, please go here.

Karou has finally discovered who she is, but at great cost--the lives of her friends and family. As the surviving chimaera are being viciously hunted down by the seraphim, Karou finds herself in the unfortunate position of having to ally with the vengeance-fueled chimaera leader who had her executed in her previous life.

Meanwhile, Akiva strives to find a way to continue to rebel against the seraphim leaders' orders, to try to atone in some way for the pain he has caused Karou. But stirring up a rebellion is a dangerous thing, and what seemed like a simple plan ends up turning into something bigger and far more dangerous to more than just seraphim and chimaera.

Thoughts: The only reason why I'm typing this review right now instead of charging straight into book 3 is that my Kindle needs charging.

What a ride. What began as a sleek, hip urban fantasy has turned into a giant war for the ages, with plenty of questions about ethics, peace, and hope. And still flickering somewhere in the depths of this war story is the star-crossed love between Karou and Akiva. One of my favorite parts from this book is when Karou explains to her bestie Zuzana what happened between her and Akiva (at the end of the last book) that caused her to leave him behind (paraphrased here for you): "Imagine if Juliet woke up and Romeo was still alive, but he had slaughtered her family and enslaved her people."

That essentially sums up the status of their relationship as we go through this book--Akiva trying to make up for everything he did, including sealing off all the portals and leaving Karou's family to die in their other world, before Karou had been able to access her memories and previous identity as Madrigal, the chimaera who had dared to love and angel (Akiva) and was executed for it. And while the details of Madrigal's particular soul survival were explained in book one, this book definitely goes into more detail about how the resurrection process actually works, as Karou is forced to step into Brimstone's shoes.

I loved the intertwining of the "high fantasy" aspect of the story--the seraphims and chimaera and magic--with the "ordinary" human stuff, and how it all intersects. I've read enough fantasy where humans are completely oblivious to the sparkles and world-ending battles happening right under their noses; I love that there are literal real-world consequences for the magical creatures showing up in the human world, and in particular, the discussion of human weapons (namely, guns, bombs, etc.) being introduced to the magical realm seems particularly chilling, given the amount of cruelty and bloodshed the seraphim and chimaera are already capable of inflicting without semi-automatic weapons.

Speaking of humans, I suspect I'm not alone in absolutely LOVING Zuzana and Mik, and how they contribute to the story. I love that Zuzana stops being That One Oblivious Human Friend and she absolutely jumps into the fray, with her boyfriend Mik in tow. She's not just a hapless victim of circumstance, getting dragged into things by Karou, but she insists on being there, in the name of friendship; besties are there for each other throughout everything, including monsters, resurrection, and the apocalypse.

Okay, is my Kindle ready yet? Because I am! TIME FOR BOOK 3!!
5 stars fantasy Laini Taylor YAF