on April 22, 2018
Like many people, I am big on self-exploration and reflection and "finding myself." I love taking quizzes. I love memes about my Myers-Briggs. (I'm an INFJ, by the way.) It's fun and can be quite illuminating.

Enter Potterverse. It has been said that seeing someone reading a book you love is like a book recommending a person, but the Potterverse fandom is 1) large, and 2) has a wide variety of personality types built into it already. Getting sorted into a Hogwarts house is such a big thing that even non-Potter fans have heard of it, and there are countless internet articles sorting anything and anyone (including Myers-Briggs types) into the four houses.

There are also countless sorting quizzes all over the internet, and not a single one is perfect, but the one I recognize as canon is the one at Pottermore.com, because it's the official JK Rowling-written-and-approved Potterverse website. You can take the Hogwarts sorting quiz, as well as quizzes to find your wand, your Patronus, and your Ilvermorny house, and all your results will be listed together in your profile conveniently for you. 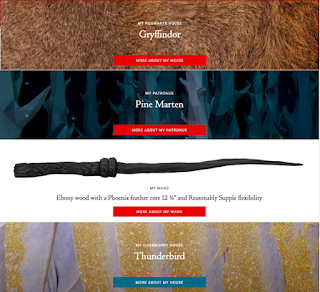 I know what being Gryffindor means, but I've never really taken an in-depth look at all my Pottermore results put together, so today, I decided I would go ahead and jump head-long into this rabbit hole and put together my own Potterverse psychological profile, based on the writings of Pottermore, as well as some various sites around the Internet.

So, I actually want to start with my wand, because it might be the simplest to explain, and besides, the wand chooses the wizard.

Some information about ebony wood from Pottermore:
This jet-black wand wood has an impressive appearance and reputation, being highly suited to all manner of combative magic, and to Transfiguration. Ebony is happiest in the hand of those with the courage to be themselves. Frequently non-conformist, highly individual or comfortable with the status of outsider, ebony wand owners have been found both among the ranks of the Order of the Phoenix and among the Death Eaters. In my experience the ebony wand’s perfect match is one who will hold fast to his or her beliefs, no matter what the external pressure, and will not be swayed lightly from their purpose.

Some information about Phoenix feather cores from Pottermore:
This is the rarest core type. Phoenix feathers are capable of the greatest range of magic, though they may take longer than either unicorn or dragon cores to reveal this. They show the most initiative, sometimes acting of their own accord, a quality that many witches and wizards dislike. Phoenix feather wands are always the pickiest when it comes to potential owners, for the creature from which they are taken is one of the most independent and detached in the world. These wands are the hardest to tame and to personalise, and their allegiance is usually hard won.

There is a little info about wand length and flexibility, mostly addressing extreme occurrences in both cases, and my wand seems to be in the middle for both. Interestingly, REALLY long wands are considered to be over 15" longer, and those wands are usually drawn to wizards/witches who have a physical peculiarity. Mine is well within "normal" range for length, but you know, on the longer side. I don't know if I am considered physically peculiar (as a plus-sized woman who is close to being able to squat and deadlift 500 pounds), but it's an interesting thing to think about.

The most recent quiz to be added to Pottermore, the Patronus quiz caused quite a stir because people weren't really sure exactly where the heck a Patronus was supposed to be. I mean, in the Potterverse, your Patronus is a conjured animal that can protect you from Dementors because it is based on your happiest memory, but people were confused whether these animals were supposed to symbolize you or reflect your personality or what. I was definitely confused when I got my result because I wasn't even sure what a pine marten WAS. And how can it be my protective animal if I didn't even know what it was?

I felt like this particular excerpt from the Patronus Charm article on Pottermore was helpful:

No reliable system for predicting the form of an individual’s Patronus has ever been found, although the great eighteenth-century researcher of Charms, Professor Catullus Spangle, set forth certain principles that are widely accepted as true.

The Patronus, asserted Spangle, represents that which is hidden, unknown but necessary within the personality.


‘For it is evident,’ he writes, in his masterwork ‘Charms of Defence and Deterrence’, ‘… that a human confronted with inhuman evil, such as the Dementor, must draw upon resources he or she may never have needed, and the Patronus is the awakened secret self that lies dormant until needed, but which must now be brought to light...’

So I'm like, Hmm, okay... Somewhere deep inside me, I've got a dormant pine marten characteristics that will come out when faced with evil. So what are these characteristics?

If you have this cute creature as your Patronus, you can trust that you will be defended fiercely when needed. Although the pine marten is small, about the size of a house cat, it is in the same family as the badger and wolverine, so fighting comes naturally. They also have great stamina and even with such short legs, can travel over 12 miles a day! (Source)

So... my "awakened secret self" is adorable but also vicious when necessary. (Note, the happiest memories I had in mind when I took the quiz were the birth of my daughter, and my first powerlifting meet.) *thumbs up!*

For my two house results, I will go over what they mean separately and then how they connect to each other:

Gryffindor is the "hero" house, because Harry, Hermione, Ron, and most of the heroes of the Potterverse are in it. We're the "good guys," although, it's kind of a skewed viewpoint because the story is more or less being framed by Harry's perspective. Even though I AM a Gryffindor, sometimes I feel embarrassed admitting to being one because Gryffindor is the house that kinda gets shoved in everyone's face. :P Also, even though Pottermore officially sorted me there, I still question whether it's my correct house (as the house that values courage, chivalry, and determination), but my friends swear up and down that I am TOTALLY Gryffindor, so I embrace it.

Ilvermorny is the American wizarding school, and much lesser-known than Hogwarts. (It is discussed in the movie Fantastic Beasts and Where to Find Them, as the events take place in America, with American wizards except for Newt Scamander and some other famous names from the folklore of the original series.) I don't really know much about Ilvermorny or its houses, but according to Pottermore:

Named by Chadwick Boot after his favourite magical beast, the Thunderbird, a beast that can create storms as it flies. Thunderbird house is sometimes considered to represent the soul of a witch or wizard. It is also said that Thunderbird favours adventurers.

When I did some basic googling about what your Hogwarts house and Ilvermorny house mean when taken together, I found some articles that felt that Gryffindor aligns better with Wampus house (which represents the body and favors warriors), and that Thunderbird aligns better with Slytherin, and I think this is interesting because of the four Hogwarts houses, I feel that Slytherin fits me the least (not because I think they're bad, but just because I don't think I have that type of intelligence). But I did find a couple of places that discussed what it means to be Thunderbird-Gryffindor (or any other combination of Hogwarts and Ilvermorny):


Thunderbird house is said to favour adventurers, and this is perhaps the most literal interpretation. Thundergryffins tend to be explorers and thrill seekers. Their bravery is not necessarily geared to some righteous cause (though this combo does not preclude that) they simply want their life filled with excitement. As such they can be easily bored which can make them irascible if they are deprived of stimulation. But they are bound to make interesting the lives of any who calls them friend. (Source)


If you're a Gryffindor/Thunderbird, you're a person who might come off as a little temperamental or flighty, but deep down you're a really rational person who tends to surprise people with the depth of your thoughts.
You're a person who might be a little detached from people, not because you don't like them, but because you tend to be in your own head a lot. You're a person who likes being around people but also needs time alone to decompress. You challenge yourself more than most people do. More than any other house combination, you're okay with not knowing the answers to all of your questions. You just want to do right by everyone and everything, which is a tall order and you know it. You're an adventurer, but you're not foolish by a long shot; you look inside yourself for the answer and then go out and find it. You're a person who's often underestimated but never replicated. (Source)

That second one ^^^ felt really spot on, especially the part about being detached. And actually, it echoes what was said above in the profile for the Phoenix feather wand core... *insert thinking emoji*

Anyway, I don't know what all this means together, but now it's all in one place for me to ruminate on some more :) Personality profiling is a huge, interesting field of study, and when you take into account the fact that all of the above is based on one (expansive, immersive) fictional universe... it's pretty mind-blowing, the work that JK Rowling put into all this. I may not agree with everything she says or does, but I do have to tip my cap to the world she created and to all the fans that keep it alive.
exploration JK Rowling listicle