A Court of Frost and Starlight by Sarah J. Maas 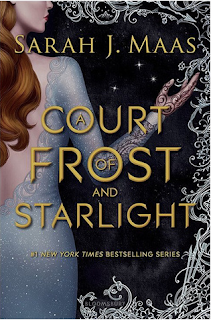 This is officially designated book 3.1 of the ACOTAR series, meaning that it's not a full novel, but it is a follow-up to the third book. It's kind of a sequel--an epilogue, really--that sets up the spinoff novels that will come out in the future.

This review may contain spoilers for the previous books in the series. For those reviews, please see below:
Book 1: A Court of Thorns and Roses
Book 2: A Court of Mist and Fury
Book 3: A Court of Wings and Ruin

Summary: Hybern has been defeated, and for now, Prythian is trying to put itself back together and maintain the peace that they fought so hard for. For Feyre, now back with her beloved Rhys and their Night Court, it means settling into her duties as the High Lady.

This includes not just the typical responsibilities to their people and their kingdom, but also sorting out the aftermath of everything they just went through (losing her father, nearly losing Rhys), helping her sisters settle into their new lives (not always successfully), and finding her place in this new world.

For Rhys, it also includes managing dissension both within his kingdom and between other kingdoms, particularly Tamlin and Spring Court, which sits next to the now wall-less human lands.

As the new Court of Dreams prepares to celebrate their first winter solstice together, new troubles pop up, and old troubles continue to linger,  but they manage to (mostly) get through it all together.

(Sorry, that was a really corny way to end the summary!)

Thoughts: I love this series, so of course I loved this book, but I have to say... 200-something pages (after you're used to SJM's giant tomes) does NOT feel like enough. I mean, I know I have a tendency to slam through her books anyway, but goddamn, it was over way too quickly and I'm feeling a little dissatisfied (just because I've been waiting an entire year, and I needed more than that).

That said, ACOFAS gives you plenty to chew on while you wait for the next book (which is going to be full-length!!!). ACOFAS doesn't really have a plot; as I said above, it's more like an extended epilogue, and it also sets up a bunch of things that will be happening in the new spinoff parts of the series, so in that sense, there's a lot going on, but this installment itself is more character-focused.

Without spoiling anything, we check in with basically each of our beloved characters (and even our less-beloved ones), with a little more to each of their stories revealed. The book is narrated in turns by Feyre and Rhys in first person, with some scattered chapters narrated in third person focusing alternately on two other characters, giving you a little more insight into THEIR thoughts and feelings. (I guess only Feyre and Rhys get to tell their own stories.)

Even though I love me some Feysand (ship name for Feyre + Rhysand), theirs were actually NOT the most compelling stories in this book (and I do not say that lightly). Nope--in my personal opinion, that honor goes to (separately) Nesta and Tamlin, oddly enough. I mean, I will always love reading fluffy/happy/lovey scenes between my favorite High Lord and Lady, but as far as my curiosity being piqued and wanting to know more, I was very interested in Nesta, who has never been kittens-and-rainbows and is even less so now after the war, and Tamlin, who... well, let's say I feel really sorry for. The Tamlin that we loved in ACOTAR is definitely gone, and the Tamlin that we wanted to strangle in ACOMAF/ACOWAR is also gone, and the Tamlin that is left is... not much. (By the way, they are NOT the two alternate-POV characters in this book.)

We also meet some compelling new characters in this book, and I hope they make appearances in future books, namely: Emerie, the shopkeeper at one of the Illyrian camps, and Ressina, one of the artists living in Velaris.

In sum, I really appreciated that not everything is sunshine and roses after the end of the war, but I also appreciated that not everything is doom and gloom either. (One of the parts that amused me GREATLY was Rhys, Cassian, and Azriel's annual Solstice morning tradition.) It was a nice reprieve from the drama, but it is realistic in the sense that there is still more to be done. Way, WAY more.

And I can't wait to read it :)
4 stars fantasy Sarah J. Maas YAF