on July 29, 2018
It's been a while since my last review. I had a lot of personal things going on these last couple of months (which is a story for my personal blog, and not this one), so I haven't felt motivated to get lost in fictional drama when I've had a lot of real drama to deal with :/

I WILL be getting back into the swing of things and making up for lost time, but for now, I'm going to share a review that I posted back in January on Goodreads, but for some reason didn't put on my blog. The reason why I'm bothering to repost it here is because I had already reviewed another book from this series on my blog (it's a romance series, which means that each book is a standalone, but they feature commonalities/are related), and I'm about to start the most recent one, so I want all the reviews to show up here as well :) 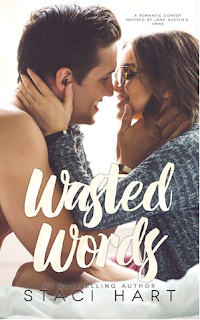 Summary: Cam Emerson--nerd, bookslinger, and bartender--is a matchmaker extraordinaire. Nevermind the fact that the only men she's ever interested in are fictional ones. Of course, there's her roommate, Tyler Knight. However, they could NOT be any more different. There's no way the gorgeous ex-football player could ever be interested in the nerd girl, right? At least, that's what Cam thinks.

Tyler, however, finds himself drawn more and more to Cam, but getting her to trust him proves to be more difficult than he thought. While Cam is utterly confident in her ability to help others find romance, she seems completely incapable of seeing herself.

This is the first book of Hart's Austen series, based on the novel Emma.


Thoughts (originally posted January 2018): This was cute and funny, and I'm just going to say that I totally fancasted Kelly Marie Tran as Cam, and nothing you say will change my mind.

I did not love the original Emma (the book OR the character, though, you're not supposed to like the character), but I did love Clueless, and I totally loved this. I found Cam to be way more likeable than Emma Woodhouse, actually, though that could have something to do with the fact that she was nerdy and smart, as opposed to being a rich girl who meddles. Is she perfect? Of course not. Is she actually way more insecure than Emma would be? Totally. But she was believable as a modern-day version.

I was definitely on the hunt for other characters from the novel, and I'm glad they included a Harriet, a Robert Martin, and a Frank Churchill (though, I think Kyle is way worse than his inspiration, and for that matter, Greg and Adrienne were not as bad as the actual Eltons).

This was clever and REALLY well done, and I can't wait for more of these Austen adaptations :)
4 stars adult Jane Austen romance/erotica Staci Hart