Muse of Nightmares by Laini Taylor 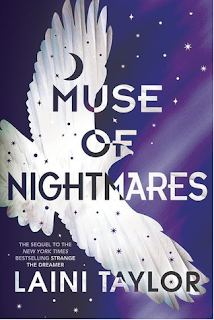 When human interference leads to mass destruction in Weep, Lazlo finds himself suddenly blue-skinned, the long-lost son of Skathis, the brutal god who could bend Mesarthium to his will and raped countless generations of human women to sire godspawn. Sarai, the godspawn daughter of the goddess of despair and the legendary god killer, Eril-Fane, finds herself now a ghost, and at the whim of Minya, who has the power to control ghosts and is hell-bent on taking vengeance on Eril-Fane as well as the rest of humankind. If Lazlo does not do what Minya asks, she will let go of Sarai's soul, letting it evanesce into oblivion.

But in the midst of their battle with Minya, a larger threat looms, with its own score to settle when it finds the seraph-shaped citadel, as well as the larger mystery of what happened to all the other centuries' worth of godspawn babies, as the war between gods and humans comes ever closer.

Thoughts: WOW. For all my complaining about all the exposition in the first book, I find myself now hoping that Laini Taylor eventually adds more to this universe because it is too large and too rich to be limited to just two books (but two dense, amazing books at that!)

I love character stories, and while there is plenty of plot to be had, what I really loved about this book, and about this series in general, is that every character is complex. I mean, Lazlo and Sarai are definitely "good" characters and we love them automatically because they are pretty obviously the heroes of the story, and Skathis (whom we meet indirectly and in memories) is pretty obviously cruel and hate-able, but I was absolutely wowed by the way Taylor wrote Thyon, Minya, Eril-Fane, and other characters (who are spoilers, so I won't name them). It was easy to dismiss Thyon Nero because he is the rich, powerful, golden-haired snobby dude who tried to take credit for Lazlo's hard work, and it was easy to dismiss Minya as too broken and angry to be saved. Eril-Fane killed godspawn babies, but his uprising against the gods was because he had been abducted, raped, and emotionally manipulated by Isagol for three years, and then had to see his wife endure the same from Skathis, and they were only the latest in two hundred years' worth of abductions and forced pregnancies. Taylor did an excellent job of giving these characters so many layers that they become, dare I say, sympathetic by the end of the book.

And at the center of all this is the beautiful star-crossed love between Lazlo and Sarai: Lazlo, who is all things pure and only came along on this trip because in his youth, he fell in love with the story of the lost city of Weep, and Sarai, who is not a dreamer like Lazlo, but the bringer of nightmares. I was rooting for them SO HARD, and the end of the first book had me appalled, but I'm glad that that wasn't the end of their story.

And I hope that this isn't the end, either. Tayler threw in a bunch of nods/references to her previous series, Daughter of Smoke and Bone (which I LOVED!) and then ended the book with: 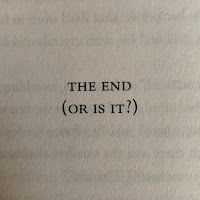 So... I would personally deliver Laini Taylor some Pip's (she lives in Portland!) if it means we could get some sort of novella, especially a cross-over, in the not-too-distant future. How 'bout it, Laini?
4 stars fantasy Laini Taylor YAF