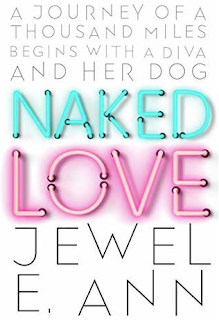 Summary: (as provided by the publisher)

What happens when a high-heeled diva goes camping with her sister’s dog?

“Make my death quick, and please don’t tie me up. I’m claustrophobic.”

Jake Matthews, diva-hater, agrees to let her tag along on his annual but primitive trek to the West Coast.

“Okay, Princess, I’ll take you to L.A., but your crown won’t make it there in one piece.”

She’s desperate and out of options.
He’s ruthless and out of patience.

Thoughts: This novel had so many things that I generally hate reading in romance novels (or in any sort of fictional medium, really):
- a prissy, high-maintenance, immature, shrill female protagonist who cares too much about her appearance and designer stuff
- a grumpy Alpha-ish former fighter who is impatient when it comes to women's interest in their own appearance and designer stuff, and is actually kinda mean to her about it
- disastrous/embarrassing road trip comedies
- gags involving bodily fluids

It is to JEA's incredible credit that I stuck with it. I've been on her blog team for a while now, and if there's one thing I know about her books, it's that she does an amazing job of writing flawed, complex characters that end up being more than just tropes or stereotypes.

Because... I'm not gonna lie. I didn't like Avery all THAT much in Undeniably You (which was the first JEA book I'd ever read), and I definitely didn't like her for about the first half of this book. And I didn't really like Jake all that much either. (Compared to previous male protagonists JEA has written, Jake has all the descriptive markers that I'm just not personally attracted to: judgmental of "girly girls"; former MMA fighter; vegan; likes camping; sexually aggressive. Nope, nope, nope.) In fact, as their road trip started, I really just had major sympathy for Swarley, the dog, for being stuck with those two.

And that's not to say that JEA was doing a bad job of making me feel connected to her protagonists, as would be the case with other, less-skilled storytellers. OH NO--she was doing a GREAT job, of laying the groundwork for two characters who had so much growing they needed to do before they could have any sort of healthy relationship. The problem, when other, less-skilled storytellers are at the helm, is that we never get the payoff, in the form of character growth. I've read many novels with exactly these same sorts of characters, and they are usually flat to begin with, and they pretty much stay flat for the entire book, except that they end up falling in love and are still kinda flat together in their coupledom. They don't really learn anything or grow out of their flaws; they just kind of fall in love and learn to live with those flaws, but without ever actually correcting them. There's no self-reflection; they just decide that their love (and their sex life) is strong enough to get them past it. OR, they both change so completely that they lose what made them them in the first place.

I'm not going to say that I didn't have just a wee bit of fear that this would be the case (just out of conditioning, I suppose). I was worried that Avery might keep being punished for loving makeup and designer clothes, or even worse, she might end up at the opposite extreme and end up eschewing them altogether. (Full disclosure: I used to maintain my own beauty blog. I'm not quite at Avery's level of needing to appear fully put-together at all times, but I completely support makeup as a form of artistic expression and personal empowerment, and I resent people who see it as merely frivolous vanity.) I was worried that Jake might never get called out on his sometimes-not-so-borderline misogynistic treatment of Avery. (Again: I see these characterizations as intentional, and NOT reflective of JEA's writing ability.)

Never fear, though. JEA came through big time, on both those fronts. I didn't doubt that she would, but let's say I saw this novel as a test of some sort--again, I've been on her blogger team for a while, and though I definitely would not say that I'm completely unbiased when it comes to her books, I would like to believe that I could call out authors I love if I needed to. I don't ever want to be blindly loyal to anyone, if that makes sense. If Avery and Jake were never fully fleshed out, if Naked Love ended up just as one-dimensional and shallow in its characterization and storytelling as other similar romance novels have, then I was fully prepared to discuss that and give it a low review.

But of course, there was no need, because JEA upped the game, as she always does. She did not let me down. I can't say too much more without spoiling certain events, but I was SO impressed. I felt like I let out a breath that I was holding for far too long. For the second time in a row, JEA has managed to take what has become an overused cliche in the hands of other authors (her last novel was a student-teacher romance, and now this one) and spin them into beautiful stories of very flawed, very human people. She treats them with empathy and with respect for their humanity, but she doesn't let them off the hook either, and I love her for it.

I have only one complaint, and it was not a deal-breaker for me, but since as a society, we are having more conversations about diversity and representation, it would be remiss of me not to point it out: there are only two characters in the book who are explicitly described as POC, and they are both completely minor characters in terms of presence, and they are discussed in reductive, sexualized ways. This didn't end up being a deal-breaker, again, because it should be noted that they were discussed this way by Avery PRE-character development, and not specifically owing to their race/ethnicities. But when you only get two characters of color, and that's how we're getting them, it makes me go :/ a little, you know? It didn't change my overall feelings about the book, but it still makes me yearn for better representation across all forms of fictional media.

That said, another masterful story by one of my favorite authors of the genre. :) I'm beginning to think there's nothing JEA can't tackle, in terms of storytelling. 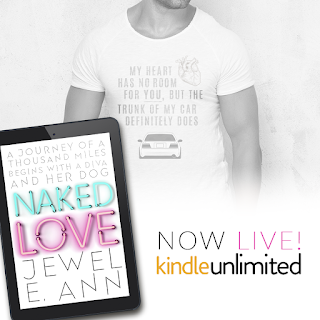