This Is Not a Love Scene by S.C. Megale 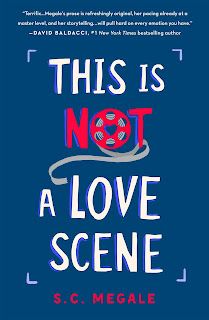 Synopsis (provided by publisher):
Lights, camera—all Maeve needs is action. But at eighteen, a rare form of muscular dystrophy usually stands in the way of romance. She's got her friends, her humor, and a passion for filmmaking to keep her focus off consistent rejection...and the hot older guy starring in her senior film project.

Tall, bearded, and always swaying, Cole Stone is everything Maeve can't be. And she likes it. Between takes, their chemistry is shockingly electric.

Suddenly Maeve gets a taste of typical teenage dating life, but girls in wheelchairs don’t get the hot guy—right? Cole’s attention challenges everything she once believed about her self-image and hopes for love. But figuring this out, both emotionally and physically, won't be easy for either of them. Maeve must choose between what she needs and what she wants, while Cole has a tendency to avoid decisions altogether. And her failing lungs might not wait for either.


Thoughts: Right off the bat, what I noticed about this story is that it does not sugarcoat. Maeve's narration is brash and raunchy, and I liked it.

Let's be honest here, the way Maeve would like it--as this novel is called This Is Not a Love Scene, you should probably expect going in that this is not some sweet coming-of-age romance. Maeve tells us straight-out that she is THIRSTY. She is on a mission to demonstrate to the best of her ability that she is NOT asexual; she is an eighteen-year-old girl with a healthy libido, and all she wants in life is for a guy to like her like that. I've seen a few early reviews that say she comes on too strong, and sure, maybe she does, but I also imagine that she's probably extremely frustrated. This is not a story of love, but a story about sex. Or rather, her lack thereof.

So, the first thing to keep in mind is, don't be shocked by her language and behavior. (Though, I'm not entirely sure about recommending this to younger teens.) The second thing to keep in mind is, the "romantic interest," Cole, is no romantic hero. There is no way in hell I would offer up Maeve and Cole as "relationship goals," but in a way, it's still a really important story to tell.

I will be the first to admit that I am no expert on representation of individuals with disabilities, but I get the feeling that the general narratives we're always told (as able-bodied consumers of media) is that while it's "okay" to use individuals with disabilities as INSPO (why it's not actually okay is a whole discussion for another time), it's never really okay to see them as sexual beings who have sexual needs. And yeah, there was that one movie based on that one book (that actually gets called out in THIS book, because the ending was some tearjerker-fodder that included the character with the disability deciding that he'd rather die than live with his disability), there's not a whole lot of just, "Hey, people with disabilities also like to just eat ice cream and hang out with friends and, you know, have sex!"

Maeve is not a perfect person. She's inconsistent sometimes, she's immature sometimes, and she's problematic sometimes. She flirts with every attractive guy she can, some of whom might be older. Oh, right! She's a normal human teenaged girl! She is complex, and her relationship with her disability is complex as well. She doesn't always "suffer with patience." And sometimes she uses her disability to get out of a boring class and hang out with her bestie.

But we do also see characters who would want to use her disability to elicit an emotional response, or who are just simply insensitive. One such character implies at one point that she keep an eye on her friend because she has nothing else to do. We experience her frustration at the fact that the local ice cream place doesn't have a ramp, and she talks about how it wouldn't be a big deal if it weren't the POPULAR place for other kids her age to hang out, and she is forced to sit outside while her friends pay for her.

So we get a gamut of emotions, situations, and responses through Maeve's character.

And we also have Cole. Cole, who is a little older, and an actor in one of Maeve's film projects, and totally hot, but... while he has no problem sexting her, he is much more lukewarm in person. He's the sort of guy I would warn my friend against. What I find interesting is that while Maeve is clearly sexually interested in him, and that's kind of the basis of the story, she is also guilty of romanticizing him. She keeps referring to the time he played the Beast in a theatrical production of Beauty and the Beast, and I definitely personally feel like, if someone kept talking about That One Thing I Did That One Time, I would find it tiring after a while. Because Cole is definitely no prince, not even in disguise, and I think that's a significant point of characterization. Maeve is definitely wrong to romanticize him, but of course, that's just a thing we do when we have feelings for someone, right? We create an idealized version of them in our heads, and rarely does the reality live up to the fantasy. And maybe that's the lesson we're supposed to learn from Cole. This is not a love scene, and there is no soft lighting and romantic music; there is fumbling and d*ck pics and raging hormones.

The other, more "romantic" character in the story, whom I won't name (but it will become very obvious throughout the story who it is), isn't perfect either, by the way. And he is an interesting foil to Maeve's story, but I can't go into many details without spoiling, but let's just say that "health" is a broad topic, and the lack of it can affect different people in so many ways.

To quote John Green, we need to "imagine others and ourselves complexly." And I think that's my takeaway from this entire thing. Unless you are already pretty involved in and informed about the disability rights movement and activism, chances are, you have a certain mental image of individuals with disabilities, and chances are, that mental image is pretty limited. (I can categorically tell you that I have so much I need to educate myself about, so I'm not here pointing fingers.) I think that a book like This Is Not A Love Scene (which is an #ownvoices book, by the way!) is a good step towards breaking down some stereotypes and helping us to imagine others complexly. And moreover, it's just enjoyable to read. 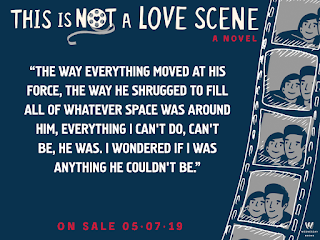