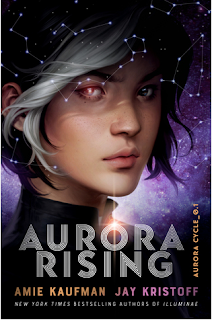 Summary: Tyler Jones is the Golden Boy of his graduating class at Aurora Academy. He works the hardest, has the highest marks, and is slated to be one of the BEST squad leaders.

Until he misses the big Draft, answering a mysterious distress signal and rescuing a girl who ends up being the sole survivor on a ship that was given up for dead... two hundred years ago.

So now, Tyler, who was to have his pick of the best students at Aurora Academy, is now stuck with a squad full of rejects, outcasts, and sociopaths. And moreover, the girl he rescued? They don't really know who she is or what she's doing there, and neither does she, but there is something weird and scary about her. And suddenly Squad 312 finds themselves on the run from every major governing space body, space crime lords, and even warring alien races as they try to protect her.

And also, this mismatched group might be the thing that saves the galaxy from an ancient war. No pressure or anything.


Thoughts: I first heard about this book when Jay and Amie talked about it while on tour for Gemina. That's how long I've been waiting to read this.

At the time, they kind of billed it as a something like Hogwarts-rejects-in-space (which, I mean, who could resist that?), but in truth, what Squad 312 REALLY reminds me of is one of my favorite tv shows ever, Leverage.

In case you've never seen it, Leverage is about a group of criminals--a hitter, a hacker, a thief, a grifter, and a mastermind--who use their skills to take down the powerful and wealthy, and help those who have no legal power or recourse. A Robin Hood sort of thing. Let me go into more detail:

The mastermind is the leader and the tactician. It's his job to manage his team and know their strengths, and to stay a dozen steps ahead of the enemy. On the show, Nate is originally just a regular guy. He was not a career criminal the way the rest of his team is, but as life circumstances draw him into that world, he ends up being one of the sharpest minds in the business. Obviously, the mastermind of Squad 312 is Tyler. At first, he's the strait-laced, never-says-a-cuss-word, never-disobeys-orders sort of guy, but as they get further into their quest (and further away from the law), Tyler really starts to shine.

On the show, Sophie is the grifter of the team--she can read people really well, navigate difficult situations using her various talents, and basically convince people to do just about anything she wants, occasionally using her beauty to do so. In this book, Scarlett, Tyler's twin sister, is the Face of the squad--that is, she is highly trained in diplomacy and negotiations, and she's fluent in many languages and customs as a part of her role. In addition to that, she is a flame-haired bombshell, and not afraid to use her sexuality to create advantages for the team. On the show, Nate is the one who manages the team, but Sophie is the one who takes care of everyone--Scarlett is very much the same, able to pick up on her squad members' emotions and talk them down if needed.

The hacker role is pretty obvious--he's the tech wizard who knows a lot of stuff and opens doors for everyone. Also, like one might guess, he's not the BEST at dealing with other people and might be better at machines than humans. On our squad, that's Finian. He's Betraskan (an alien race from the planet Trask), and if his snow-white skin/hair and solid black eyes don't make him stand out enough among the humans, he also has to wear an exoskeleton suit to aid with his mobility. He's got sarcasm for DAYYYYS, and it's his defense mechanism--it's possible that it's his personality, and not his suit, that makes people constantly tell him to shut up.

The hitter is the guy who is the combat specialist. His role IS violence. Kal is our squad's hitter, also known as the Tank (which is exactly what it sounds like, if you are into MMORPGs). He's from an elf-like alien race called the Syldrathi, and is the member of a specific cabal (subgroup) called the Warbringers. He's got pointy ears and violet eyes (like my favorite fae, Rhysand), and he's got some sort of a disarming touch much like the Vulcan Death Grip. He's also got long silvery hair, much like Legolas (and there are jokes about that in the book!) He's stiff and formal, and doesn't like being touched.

On the show, the thief is a woman named Parker, and in addition to being an adept lock-picker, codebreaker, and pickpocket, she's also "twenty pounds of crazy in a five pound bag." She's not the most adept at reading people, and she has sociopathic tendencies, including an affinity for tasers. In Aurora Rising, tiny Zila is not a thief (she's the science and medical person), but her disciplinary records DO mention her shooting her bunkmate with her disruptor gun over and over just to see what would happen. (It was set to stun.) She's always quietly watching everyone else in her squad, as if she's mentally cataloguing her observations like a wildlife expert, but even though she's a bit odd, she always comes through.

That leaves one more squad member, whom I couldn't fit into the Leverage paradigm, because she is so reminiscent of a different character from a different favorite tv show of mine: Cat is the tough, tattooed, mohawked Ace, the pilot of the team. Her nickname is Zero because that's how many targets she missed in her final exam. She's Scarlett's roommate and Tyler's best friend, and a total badass. And yeah, there's some underlying romantic tension between her and Tyler.

Alpha, Ace, Face, Tank, Gearhead, and Brain. This book is a combination of Leverage and Battlestar Galactica, and as you can guess, I was basically in love with it before I even GOT the book. The awesome official artwork helped too:

Oh, right. I forgot: Auri, the mystery girl that Tyler rescues from a derelict ship. I can't say too much about her without getting spoilery, but Aurora Jie-Lin O'Malley (she's half-Chinese, half-Irish) is found on the Hadfield, floating lost in the middle of a major space storm. She's been frozen for over two hundred years, and when she wakes up at Aurora Academy ("Aurora" is a popular name), it's clear that this is NOT where she was supposed to be. And she keeps having weird hallucinations and blackouts. Auri is not what she appears to be (even SHE doesn't know what she is), and the mystery of her origin forms the basis for the story.

Aurora Rising is a fun, action-packed adventure. I was worried that it wouldn't live up to The Illuminae Files, because, come on, that series is efffffing spectacular, but I found that I loved this one too, for completely different reasons. Aurora Rising takes a more traditional fiction format (like, a regular novel with chapters and stuff), but the narration alternates between squad members, and I LOVED how distinctive each person's voices were. The only times I ever had to double-check the narrator were when I was reading Scarlett and Cat's chapters, but they were still pretty distinctive. (I think their similarities are what makes them best friends, if that makes sense.) Zila's chapters were the most amusing to me, because they were extremely reflective of her personality (succinct, straightforward, hilarious). Every single squad member is complex, well-developed, and loveably cheeky in their own way. The whole story itself has this sort of devil-may-care humor that I love so much, and despite the catastrophes and galaxy-ending-ramifications of the events of the story, I just loved the tongue-in-cheek tone that permeated through the book. It's funny and doesn't take itself too seriously (and then when it DOES suddenly get serious, you really, really feel it).

In general, the book lends itself well to cinematic imaginings--you can see exactly where you would splice certain sequences together, alternating between flashback and present-day. I actually really hope this gets picked up as a movie or a show, because I'd love to see this book visually interpreted, from some of the places they visit to each squad member in particular--I love the aesthetic diversity of our squad. (Look at that artwork!!) I could picture everything happening in this book so vividly, and that's kind of what helped me slam through it in just 24 hours. I DEVOURED this. There's even a particular part of the story where they are in a bar that sounds SO similar to the Mos Eisley Cantina!

And maybe that's why I ended up loving it so much. I won't be so presumptuous as to speak to Jay and Amie's influences, but I loved The Illuminae Files because it reminded me of Silent Hill and House of Leaves, and Aurora Rising reminds me Leverage (and even Six of Crows!), and BOTH contain elements of Battlestar Galactica, so basically, their books feel like a love letter to all of my nerdy influences. (Throw in Star Wars and Star Trek and all the Lord of the Rings jokes too!) Aurora Rising is the story of a motley, mismatched squad on a mission, and I loved every minute of it, and now I have to wait at least a year for book 2.

Note: After slamming through this book on my Kindle, I am now going back to listen to the audiobook, because they brought back ALL OUR FAVE VOICES from the Illuminae audiobooks, including Lincoln Hoppa, who voiced AIDAN (he's Finn for this one) and Steve West, who was the silky-voiced Jackson in Gemina. (He's Kal, whose voice is described in the book as "like chocolate.") From what I can tell so far, they just switch off on the narrating (so, it's not an audio drama the way Illuminae was), but I'm still REALLY excited to hear all these familiar voices again.
5 stars Amie Kaufman Jay Kristoff scifi YAF