Movie review: The Sun Is Also a Star 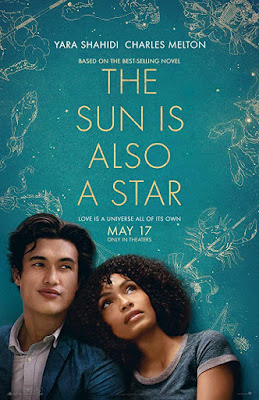 For my review of the novel, by Nicola Yoon, please click here.

I really liked the novel when I read it a couple years ago, so I was really excited for this movie to come out. (Not the least of all, because Yara Shahidi and Charles Melton are like, THE MOST BEAUTIFUL PEOPLE I'VE EVER SEEN.)

The quick sum-up is that Natasha and her family are undocumented immigrants, and the day before her entire family is due to be deported, she meets Daniel, an American-born son of Korean immigrants, on the way to a college interview. Tasha is all science and sensibility and facts; Daniel is a poet and a philosopher. Daniel is a writer who doesn't want to become a doctor like his parents want him to; Tasha is a New Yorker who doesn't want to be forced to leave the city that has become her home, even though the American government feels otherwise.

Daniel tells Tasha that he could get her to fall in love with him in one day, using scientific methods from a study he read about falling in love; Tasha is beyond skeptical. But you can probably guess where this goes.

Is The Sun Is Also A Star an improbable love story? Sure. It has its adorably cheesy moments and intense staring. But whether or not we agree that two people can fall in love in one day, consider that the story might be asking us to fall in love in other ways as well:

First of all, it's definitely a love letter to New York. There are TONS of movies that feature New York as its own character, and I've seen a lot of them (though I've never been there myself). I feel like, FOR ME, this is New York's Before Sunrise (complete with a trolley car kiss and falling asleep in a park). I fell in love with the New York that was presented to us in this movie. I even now want to go visit all of the places that were featured! We see the city through Tasha's eyes especially, because New York is where she belongs, and on her last day in the city, we see everything that she loves about it (as well as the places that Daniel loves too).

Secondly, it's a love letter to the immigrant experience, and as a child of immigrants, I related to this so strongly. Immigrant parents, bottom line, want a better life for their families. That's why they come here, documented or undocumented, because America represents a promise of a better life. But it doesn't come without struggle. I mainly connected to Daniel's story, because I too am Asian-American, and I understood both the parental-pressure-to-become-a-doctor aspect, and I also understood Daniel's brother's pushback against that pressure, wanting to be more "American," etc. And of course, I also understood that when you are the child of an immigrant, you are your parents' hopes and dreams, poured into every cell of your body. (I also loved the explanation of how Koreans--and other Asian cultures--have a different naming convention. In Vietnamese, we do the last-name-first thing too, and my Vietnamese name is just a hair different from what it is in English.) It's also a love letter to the immigrant experience from the standpoint of, Look how much pain is caused by these deportations. What made me cry during this movie was thinking about how, if THIS is how hard and sad things are for Natasha, then it's definitely worse for so many people who are going through this (and worse) in real life right now. This movie is a plea for empathy and understanding. The media likes to paint a certain picture of undocumented immigrants, and I hope this movie is one that can balance that in some way.

Thirdly, it's a love letter to the good parts of being American. When Tasha has to answer a question on a form that reads "What does being American mean to you?", we see her mental images of dancing and laughing with her diverse group of friends and eating ice cream with her family. It's freedom; it's comfort; it's space to be yourself and live a happy life, the simplest things we all wish for. She doesn't imagine money and power; she imagines those little happy moments that make life worth living, things that America theoretically promises to everyone. The movie also strongly highlights diversity, in the scenic ways that ethnic neighborhoods are depicted, to the fact that (I think?) every speaking role in this movie was played by an actor of color. I know there are some who would disagree with me, but I think diversity is a strength, and the promises of hope and melting-pots are something uniquely American to me.

Lastly, it's a love letter to love itself. Again, while any one of us may be skeptical about falling in love with someone after just one day, I like that the film (and the story) isn't REALLY trying to convince us to take that seriously, but just simply to open our minds to it. Fall in love with the possibility of love. Fall in love with the possibility of hope. It doesn't have to always make sense, and it isn't always convenient, but to quote one of my favorite movies, "love actually IS all around."

Other thoughts:
- The karaoke scene--I liked that the singing wasn't a perfect vocal take.
- Holy WOW, these two actors are beautiful
- Holy WOW, Grand Central Station is beautiful
- I really want to try that bun place
- The music was really lovely
- The one time we hear Tasha tell Daniel to leave her alone in the movie, he does. And I'm really glad that that happens, because we have too many stories in this world that tell guys to keep insisting, even when the girl has clearly said no.
- The scene at the Bae family store was WOW, and I'm glad they kept it, because it's important to understand that POC are just as capable of racial microaggressions (and even macroaggressions) as anybody else. I am not qualified to speak on the whole Koreans-owning-the-majority-of-black-hair-care-stores issue, but it IS a thing.
- The ending is handled a little differently than in the book, but not in a bad way.

So yes, I recommend this. I probably recommend it even MORE than I recommended the book two years ago, because our political climate towards immigrants has, well, become more urgent, and I think this story has become more relevant. But also, it's a nice, fluffy love story that will make you make you feel good when you're tired of thinking about our current political climate as well.
book to movie adaptations Nicola Yoon YAF