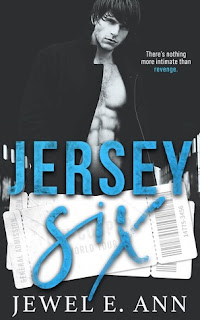 A hit-and-run accident leaves Jersey Six orphaned and homeless on the streets of Newark, shattering her dreams of school dances, pink nail polish, and a diploma.

Eight years later, a burn victim with amnesia wanders into Jersey’s barely-existent life. She resists his efforts to form a friendship until he reveals knowledge of the person responsible for derailing her future. Through their unusual friendship, she discovers a way to avenge the deaths of her foster parents.

All she has to do is destroy the world’s biggest rock star.

In the ultimate game of sex, lies, and manipulation, can Jersey discover the truth? Or will she be blinded by attraction, deceived by love, and destroyed by her past?


Thoughts: Let it be known that I am not one for gritty stories. I'm not saying they don't have merit, but I personally definitely prefer mermaids and rainbows in my romance novels, and based on what I read in JEA's romantic suspense Jack & Jill trilogy (reviews here and here), I knew this was going to pack a punch (so to speak).

Jersey herself has had to do unspeakable things, has had to allow unspeakable things to be done to her, in order to survive. I wouldn't last a day in Jersey's world. In fact, this book probably should come with a trigger warning for everything that Jersey reveals about her youth in the system. But despite all that, she is not a victim. She's a little bit wild, a little bit tempestuous, but she's a fighter (literally--when we meet her, she's knocking people out in a seedy boxing gym).

But also, I appreciated that she is not a male superhero in female skin, if that makes sense. Some writers believe that writing a strong woman means writing her as a man--no emotions, no vulnerabilities, nothing that would be considered "soft" or "feminine"--but Jersey seemed to me like a roiling ball of emotions and vulnerabilities (but, you know, with hidden knives and deadly fists). She didn't shun her femininity, even though it was something that others sought to victimize; she used the fact that others would underestimate her to her advantage.

I found Ian, "the world's biggest rock star," to be the least compelling character of the bunch for most of the book, and it's NOT because he wasn't compelling!! I was definitely curious about him, and he definitely sounds sexy and book-boyfriend-ish, but the characters I really wanted to know more about were Chris, Jersey's mysterious friend who can't remember who he is or how he ended up in his current condition, and Max, the Asian woman who is Ian's manager. (I specify "Asian woman" to give you a visual, because just naming a "Max" would probably conjure up a different image entirely.)

Chris is actually the first character we meet in the novel, and when I say JEA's characters are complex and multi-dimensional, I mean that Chris is encamped in that murky gray area. Like, we feel sympathy for him because of his disfigurement, and we are on board with him because compared to any man in her life previously, he is practically a prince. Which sets up an interesting contrast when Ian enters her life, almost like an actual prince, and sweeps her into his rock star fantasy life. And then he says or does certain things that sound really gross and boundary-crossing. But then, he is also the one that comforts her when she needs safety.

And Max--I have to say, while I have commented before on a couple of other JEA books about representation, I loved that Max is Asian and older, and I saw a bit of myself in her. As a 36-year-old Asian woman, I see very little of ANY characters who might look like me or who are older than 28, and certainly not with such an important role in the story. Max, I feel, is the moral compass of a story that REALLY plays with the ideas of morals. She's the one who, every now and then, is like, "Wait, does this sound screwy to anyone but me????" while at the same time, being the safe harbor for both Ian and Jersey. And she has an interesting story of her own that I can somewhat relate to.

Okay, so Ian... again, I want to repeat that while I found other characters more intriguing, Ian himself is a charismatic, interesting dude, and I loved that he kept everyone guessing about his motives and behavior. While on paper he sounds like a savior type, he has some mysterious past that no one seems to know about, and we can't seem to figure out what exactly his deal is with Jersey.

At least, I couldn't--I did NOT see the big reveal coming, and that's saying something because I'm usually pretty good at figuring out stuff like that. Without spoiling anything, I will just say that it is heartbreaking. (This isn't a spoiler because JEA usually finds some way to break your heart in all her books =P)

So, yeah. I know life doesn't come with a trigger warning, but I will issue one now for y'all, that this book contains graphic discussions of physical assault, rape, and other forms of sexual assault, particularly against minors. It is not an easy read, emotionally, and it makes me want to become a foster mom to save them from some of the monsters that are talked about in the book. (I am a high school teacher, and it never feels like I can help my kids enough.) It's a gritty story with characters that straddle the moral fence, but it also makes you think about the nature of love and resiliency.