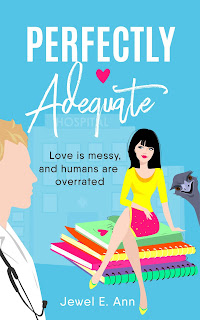 After his wife jumps headfirst into a midlife crisis, he’s left with his young son, Roman, and a lot of unanswered questions.

That something turns out to be a someone—Dorothy Mayhem, nursing student, patient transporter, reckless driver, and emu owner.

Dorothy studies humans, the neurotypical kind, through books and television. Then she emulates their behavioral patterns to fit in with her peers.

But nothing can prepare her for Dr. Elijah Hawkins.

Single dad.
Brilliant pediatric oncologist.
And the sexiest doctor at the hospital.

When his failed attempts at asking her out turn into a string of playdates with his son, Dorothy finds herself unexpectedly enamored with the boy and his father.


And that’s a problem, a huge one, because Elijah’s ex-wife is a famous plastic surgeon—and Dorothy’s idol.

Thoughts: Talk about whiplash! After the heavy, dark drama of Jersey Six, JEA takes us through a romantic comedy with Perfectly Adequate, a romance between recent divorcee Elijah and neuro-atypical Dorothy.

While there were definitely some moments I found funny, Perfectly Adequate was, ultimately to me, a sweet, at-times sad, story about communication as well as about self-acceptance--everyone, not just Dorothy, had thoughts and feelings they were holding inside that they just could not communicate to others, in some way or another, and a lot of those thoughts and feelings were in relation to insecurities, self-doubts, fears, etc.

It's purposeful that we are told, repeatedly, "The spectrum is human." Dorothy has the most outwardly obvious struggle with communicating appropriately and hearing what others are trying to say, but in a way, both Elijah and his ex-wife Julie also struggled with expressing themselves both before and after their divorce: Julie had to walk away from their marriage in order to become what she felt was her true self, and Elijah had apparently never picked up on her frustrations, and was left with feelings of anger, insecurity, and self-doubt after their divorce. Julie and Dorothy aren't just opposites in their appearance and style of dress; they're opposite in their style of communication as well. Julie lived with Elijah for years without saying a damn word about how she felt (and granted, it's not because she is sneaky or underhanded, but because she was doubting herself the entire time, and that can be rough); Dorothy, on the other hand, couldn't keep in a secret if she tried, and pretty much always says exactly what she's thinking, even if it's inappropriate in the moment.

And what I really, really love about this story is that it doesn't take sides on which style is better than the other, or which woman is better than the other. We ultimately find out who is right for Elijah, but let's be clear, this is not a case of good girl vs. bad girl. I cannot truly say that there is an antagonist in this story, unless "the complicated, difficult parts of life that keep you from finding happiness" counts as an antagonist. If there's anything to take away from this book, it's that we're all human, we all have struggles, and we all deserve love and compassion.
4 stars adult Jewel E Ann romance/erotica