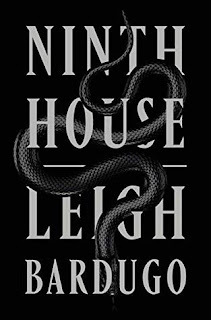 Summary: Alex Stern was a nobody going nowhere fast. After being the sole survivor of a horrific drug-related mass homicide, Alex awakes to a chance at a new life: a full ride to Yale in exchange for some work with its Ancient Eight secret societies, or Houses.

The thing is, those Ancient Eight Houses, with their illustrious, powerful alumni that include past Presidents and other well-known figures, operate using some very old and dangerous magic. And it is the job of the Ninth House, the House of Lethe, to keep those Ancient Eight in check.

Alex's work with Lethe, already dangerous and difficult to stomach, takes a turn for the worse when, first, her mentor disappears and, second, a local townie girl is found murdered on campus. Authorities are quick to brush off the murder as mundane (well, non-magical), but Alex thinks there is some House involvement. Surviving on just her street smarts, her memories of her mentor, and her unique ability, she intends to stop at nothing to unravel the layers of magic, entitlement, and privilege that surround her.

Thoughts: I'm already a big fan of Leigh Bardugo, so when I heard she was writing an adult fantasy novel, I was completely psyched--I preordered it, AND I went to her book signing in Portland.

I was not disappointed. There is a lot of world-building and mythology to wade through (and as a Yale alumna and society member herself, Bardugo definitely had a lot to draw from), but once you get into the rhythm of the story, it really sucks you in. There is a lot of flashback between present day, the recent past involving her mentor Darlington, and the slightly more distant past involving Alex's past with drugs and the difficulties of her ability (she can see Grays--ghosts that haunt our side of the Veil).

I think what I love best about this novel is that it draws a parallel between the seedy drug dealers and kingpins of Alex's past in Los Angeles and the powerful wealthy elite of Yale's secret societies (who eventually go on to become the powerful wealthy elite of American society in general, I believe), as if to say that it doesn't matter where you come from--predators are predators, and they will not hesitate to prey on the weak and the easily forgotten for their own gain. Tara, the murder victim, was a druggie like Alex, and that is why Alex cannot easily forget her and continues to investigate, even when told to stop. In the eyes of the powerful, women like Alex and Tara are considered expendable, a means to an end, and I loved loved loved seeing Alex fight back against them. Alex herself was forced to grow up too fast, falling into hard drugs, poverty, and sex for survival before she was out of high school, and in any other case, Alex herself would've been a casualty of her upbringing, long gone and easily forgotten. But instead, she essentially becomes a champion for the ones who are cast aside. I think there's a reason why Alex's past in LA is unfurled alongside the present-day events of the novel at Yale, and I think that reason is so that we can see that these wealthy elite are really no better, as long as they continue to treat ordinary people like they don't matter.

Make no mistake--this is an adult novel. While some of the ugliest things Alex had experienced was when she was a teenager, I definitely would not put this on my classroom reading shelf for my kids. Alex came from a dark world, and entered an even darker one--the book opens with a scene of human vivisection, even, (Not a spoiler, by the way.) Along the way, there are scenes of graphic violence, sexual assault via drugging, drug abuse, etc. I would definitely offer some content warnings here--this book is not for the faint of heart.

But it was really, really good, and left us on a bit of a cliffhanger. I cannot wait for the sequel.
5 stars adult fantasy Leigh Bardugo