The Life That Mattered by Jewel E. Ann 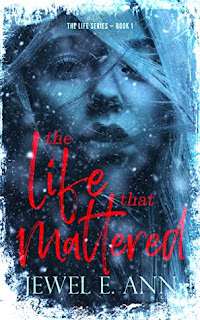 Sex isn’t love.
Love isn’t sex.
And friendship is neither.

The son of a French Olympic skier and a Malaysian fashion designer, Ronin Alexander has lived the life of a nomad, traveling the world to find his next adventure.

Life takes a dramatic turn when he meets Evelyn, a beautiful scientist who owns a bath shop in Aspen, Colorado. They defy all the rules of relationships, falling hard and quickly in love.

Their world intertwines with Evelyn’s two best friends, the Governor and his soon-to-be wife. The four become close—very close.

When tragedy strikes, things from their pasts are unveiled—unimaginable truths and the grim realization that life will never be the same.

Jewel E. Ann steps into another dimension with this mind-bending thriller, a provocative story that pushes boundaries and tests the true meaning of love.

Thoughts: One of my favorite JEA books (or rather, duets) is her Transcend duet (click for reviews 1 and 2), in which she touches upon the phenomena of reincarnation, in a way that is fascinating and believable, and not at all corny or ridiculous. In The Life That Mattered, book 1 of this new duet, she does something similar (which I won't spoil for you), and I am struck again by how she manages to take on these topics or ideas in a completely brilliant way that totally has me believing all things are possible.

AND YET, that wasn't even the most intriguing part of the book for me.

Don't get me wrong--it's VERY intriguing. I'm so glad the release date for book 2 got bumped up, because I desperately want to know what's going on.

But as someone who has a side fascination in psychology and relationships and things that make the human mind tick, I'm finding myself especially drawn to the friendship and relationship dynamics of the two main couples.

Let's back this up: Evelyn is best friends with Graham and Lila. Evelyn actually used to "date" Graham, but that fizzled quickly, and over the course of many years afterward, Graham and Lila began dating, and at the start of this book, they are engaged. But there's still a bit of weirdness there, exacerbated by a bit of an intimate experience between the three of them. Evelyn, though, meets Ronin, and they fall in love quickly and get married, and Graham and Lila go on to get married as well.

Their lives, though, end up completely different. Evelyn and Ronin live a simple life and have two kids and are still madly in love after years of married life; Graham goes on to become Governor of Colorado, and Lila slides into her role as Governor's wife, giving up her job and dreams of a family to help him pursue his.

And this is where I am most intrigued, I think, as someone who is also in her 30s and who has also felt her best friend slipping away due to the natural course of life. (There's no drama here, by the way---we didn't fight or have anything bad happen between us. We just both have busy lives, and we don't live in the same state, so... anyway, enough about me.) However, underneath the surface of these two couples, there is definitely something not in line with the natural course of life going on, and I love the way that JEA manages to hint and shape those ideas as we go.

Having reviewed a lot of her books previously, I have always considered her a really good storyteller. My favorite books of hers are ones where she takes a concept (reincarnation, a teacher-student affair, secret agents, etc.) that would've been ridiculously bad in the hands of a less-skilled storyteller and just really goes to town and weaves a really marvelous, enthralling experience for the reader. Not gonna lie, there's a part of me that feels like she could pull out three ideas from a fishbowl and still write an amazing novel with them, no matter what they are.

This book has a thing too (which, again, I will not spoil), and I'm SO READY to find out the big revelation, but also this book has really reminded me how good she is at writing the "small stuff"--the "falling in love" stuff, the "day-to-day difficulties of building a life together" stuff, the "friendships growing apart" stuff, the "how do we balance someone else's dreams with our own" stuff... all the little pieces that fit together around the big concept to flesh out the story, that also need to be handled well. You have to write the details well, in order to tell the story about the big concept well, otherwise, it ends up being really flat and gimmicky. This book is definitely NOT flat and gimmicky.

So yeah, DO buy this book to read about the extraordinariness, but also buy this book to read about the real-life, everyday stuff too. It's really good. And relatable, especially since the characters are in their mid-thirties, older than the average romance novel heroes and heroines. (I'm 37, so I'm happy to see that people my age can still be desirable and act upon their desires, because so often, the novels I read have all the "exciting" stuff happening between, like, 22-26.)

Also, thankyousomuch for writing a male lead who is Asian-American. (Well, Asian-European?) So rarely in our current popular culture do we see Asian men as romantic male leads, and I REALLY appreciate that Ronin goes against the general stereotype of Asian men as being undesirable or even effeminate, always the sidekick but never the hero. (There's nothing wrong with effeminate men, but it's a problem when men of a particular race are almost always portrayed the exact same way in popular media.) So thank you for that :)
4 stars adult Jewel E Ann romance/erotica