House of Earth and Blood by Sarah J. Maas 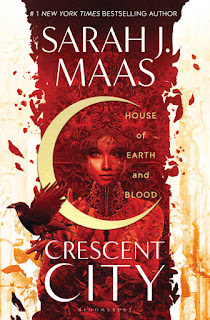 Summary: Bryce Quinlan is half-human/half-fae in a world where even being full human makes life hard, let alone being a "half-breed." But she has a job as an assistant to an antiquities dealer, an apartment she shares with a ballet dancer, a mercenary, and the someday-heir to the wolf shifter throne, and weekends full of wild partying.

All of that comes crashing to a halt as she comes home one night to find her best friends slaughtered. The murderer is apprehended, but Bryce will never be the same again.

Two years later, similar murders are being committed, and it's clear that there is a further mystery to be solved. Bryce is recruited to help investigate, due to her connections to the victims, and along with fallen angel/assassin Hunt Athalar, Bryce dives into the deep underbelly of Crescent City in order to discover the truth and avenge her best friend, unprepared for the secrets that will be uncovered.

Thoughts: I've read ALLLLL of Maas' other books (several times over, in fact!), and I was still unprepared for how this book was going to go.

This is Maas' first officially-adult novel--all her other books, despite the very adult content, are billed as YA--so I was curious how this was going to go, aside from the assumption that there would be more sexy times.

(Spoiler alert: there weren't more, but they were discussed in a more nonchalant, straightforward way instead of trying to cloak everything in euphemism. Which I think I prefer, actually, as someone who sees a lot of both in romance novels.)

"So, only three stars, Thu?" Yep. I liked it. I didn't LOVE it, but I did enjoy it. My main gripe is that (for me, personally--YMMV) the first half felt like a LOT of exposition, and I'm not sure if it was all needed, at least, right where they were presented. There were SO many names, and SO many backstories, and I'm no professional writer or editor, but I found myself asking over and over, "Is this really necessary for me to know ALLLL this right now?" I mean, now that I've finished it, I can definitely see where the pieces fall together, but even so, my brain just can't hold so much exposition, so soon, Sarah!

I also am not so sure how I feel about all the twists and turns of this whodunit. I've enjoyed the fake-outs and sneaky reveals in the TOG and ACOTAR series, but in this book, they just had me feeling impatient. I might reread the book sometime soon just to see if these twists were actually warranted and foreshadowed, because part of me was like, "... really? Are we being Shyamalan-ed?"

What did I like about the book? I definitely liked Bryce Quinlan. She's got a little bit of sass, a little bit of devil-may-care attitude, and that was FUN to read. At the same time, she's also deeply multi-layered and is still grieving, and her behaviors and motivations made her fascinating.

And while, yes, I did tire of all the different species names, legends, etc., I can also definitely appreciate how rich and complex this world is that Maas has built. It's very beautiful and interesting, and I don't know, maybe it's because I'm used to her other two series where we can live in those worlds and learn about them a little bit at a time, but I would much prefer the same for this one. Shorter, more edited books, but more of them!

I found myself mentally comparing this book to Leigh Bardugo's Ninth House, which came out a few months ago, and was also a YA author's adult fantasy debut. Both books are a little more "modern fantasy" than "high fantasy," compared to their previous YA series, and both are whodunits that feature a heroine with a troubled past and twisty reveals. Ninth House, which I LOVED, was more set in "reality" than HEB, and as such, didn't require pages and pages of mythology, though I definitely had to learn a bunch of names and places for that book too. I think why I loved that book, and why HEB wasn't quite at "love" status for me, was because I tend to favor character development more than world-building. Yes, both are important in fantasy, but the parts that hooked me in the most in HEB were when we were learning about Bryce and her personal history. (I found myself not caring a whole bunch about Hunt's history, but I liked reading about him present-day.) In fact, once we got past (most of) the exposition, I blitzed through the rest of the book--I couldn't put it down, and stayed up until 1:30 in the morning finishing it. But it took me a full week to get through the first two-thirds! Have you ever known me to take a full week to get through ANY of Sarah J. Maas' books?  I pushed through because I enjoy her as a writer, and I trusted her enough to keep going, and yes, it paid off by the end, but again... getting to that point took me a while. I'm not sure I would've kept going if it had been an unfamiliar writer.

I DO like Sarah's "adult voice," and I hope she writes more adult books beyond this series, and I'm looking forward to future Crescent City books. As I stated above, I prefer straightforward adult language over flowery euphemisms, and I think without the constraints of trying to keep things at least somewhat youth-safe, Maas could do a lot of great storytelling. I'm just feeling like, over the years, her books have gotten longer and longer, and I don't think they necessarily needed to, and I don't know if that's a HER thing, or her editor, or both.
3 stars adult fantasy Sarah J. Maas