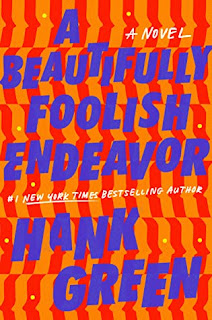 ABFE is the sequel to An Absolutely Remarkable Thing, which explores ideas like being human, being social, social media, etc. If you have not read that book and do not want to read spoilers for that book, then you might want to stop reading now.

Book 1 left us on a cliffhanger several months after April May was left crushed (literally) in a burning warehouse and presumed dead. We know, of course, that she didn't die because AART was narrated by her a few years removed from the events of the novel, but what we don't know is what happened in between... HOW did she survive? What happened to all the Carls? What about everyone else who was part of this adventure?

ABFE is told in alternating perspectives by ALL our favorite friends, explaining what they were up to in the months that followed the disappearance of April and the Carls:

And that's about all I can summarize for you, because the story gets jaw-droppingly twisty, with a lot of scientific, economic, and other fields-of-study speak that I'm, well, not educated enough to describe for you, but it totally and completely blew my mind and left me wondering whether Hank Green is a Ravenclaw or a Slytherin. Book 1 was not a simple book by any means, but Book 2 just added so much MORE to think about, about technology, about the nature of humanity, equality, equity, communication, education, REALITY, etc., etc. Holy cow. I wanted to highlight so much. I want to reread the series now that I've finished both books and spend more time ruminating, because I was blitzing through these to find out what was happening.

I give this five stars.