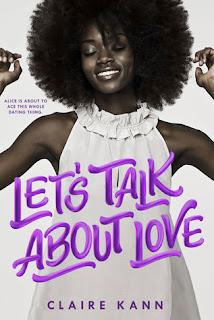 A biromantic ace protagonist who is also a black woman, with a Japanese-American male opposite. This book was soooo good, and actually, took on a whole lot of education and emotional labor. If you've never understood what being asexual means, I feel like this had a lot of good explanations. (I say this as someone who doesn't quite feel like I am ace, but I'm at the lowest of the low end of the spectrum of asexuality. In fact, this book really helped me figure out a lot of things.)

I started reading it because I wasn't sure how it would go, a romance novel where the main character is primarily uninterested in sex (because isn't that a big part of the allure of romance novels?), but what I got was so much more than that. It wasn't just about romance, but about communication---there are a whole lot of communication issues in this book, mainly because Alice is trying to figure herself out (and how can you communicate your needs and wants when you're not quite sure what they are yet?)

It's cute and funny, and without spoiling anything, I will just say that I would actually love to read more about Alice, if there were ever a sequel.

I give this four stars.