I binged the Shadow and Bone Netflix series adaptation! Spoiler alert: I loved it. 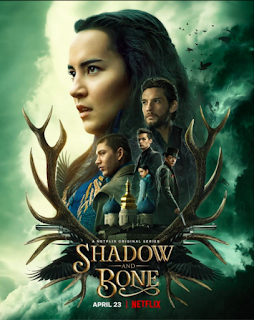 *edited to add* I apologize for errors and typos and I typed most of this with one hand while holding a fussy baby.

I have been SO excited for this! I'm a big Leigh Bardugo fan, and I've been following the progress of this adaptation since they first announced it and started announcing the cast members. (PS--to see my reviews of the books, click the "Leigh Bardugo" tag! I still have not read the newest Grisha series though--I am going to reread the originals first.)

I'm not going to summarize the plot here because that's easily google-able, but I will sum up the major "difference," which is that the series combines the main plot of the original Shadow and Bone trilogy, and then melds in the Six of Crows characters by incorporating some new original content plus some character backstories, since SaB takes place a bit before SoC does. So we meet the Crows before the events of the actual books take place. So it really is a full Grishaverse that we get to see, because obviously Kaz, Inej. Jesper, etc. EXIST during the events of SaB, even if we haven't met them yet, so it was awesome to get to see a sort of Prologue for them.

I'm going to talk about the two series' elements separately, but first: a warning that the rest of this post will contain spoilers for the show (and the parts of the books that they cover, obviously). If you do NOT want to be spoiled, turn back now! 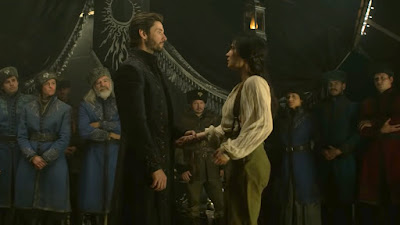 So, like my post title says, I loved this adaptation, so I just wanted to put that out there right away. BUT, I am also coming into this as someone who has read the books and liked them (I'm a bigger fan of Crows than SaB, fyi), so I knew everything about the story going into this, and it's a lot easier to miss the holes in the adaptation when you already know everything.

One of the changes that I REALLY LOVED was the conscious decision to make Alina half-Shu, and of course, the Shu in the book are coded as East Asian, which meant that it was absolutely intentional to have a half-Asian lead actress. The racism Alina experiences (as written into the script) is absolutely prescient--she experiences a number of micro- and macro-aggressions as a result of being the ethnicity of what her country considers "the enemy," from public harassment to a comment about getting her eyes fixed, and as someone who is Southeast Asian living right now in a time of heightened anti-Asian hate, it really hit home. And I'm glad it was made a part of the adaptation, because it's not really a thing in the books. It shows how hurtful and alienating it is, because even though she was raised Ravkan like everyone else, she is constantly seen as a foreigner (a hostile foreigner) because of her ethnicity.

I also just want to note that there was a lot of racial diversity in the cast, and I appreciated that a lot. Ketterdam, which is supposed to be a bustling port city, would not have looked right without a mix of races.

Another big change for me was the portrayal of Alina and Mal's lifelong friendship, and even just Mal in general. Let me be clear: I'm not a Mal fan. He's uninteresting in the book, and Alina's narration of him paints him as the jocky, popular, hot guy who doesn't notice his plain, awkward best friend. And then he's fairly resentful of her newfound power and status, which doesn't sit well with me, and overall, especially on this reread, I'm like, "Why does she even LIKE him, besides he's hot and they were kids together?" But I feel like the show did a better job of actually showing their connection and care for each other. Mal on the show has vulnerabilities, he has a "soft side" in addition to being the athletic soldier guy, and he clearly loves Alina, whether that's romantically or platonically. I never really got the sense that Book-Mal LOVED Alina, or whether he loved having his old reliable by his side. Maybe the fact that the show has some segments narrated by Mal himself is what helps with his characterization--the book series is narrated by Alina, so it doesn't really paint a full picture of him.

So, while Book-Mal bored me, I was in lurrrrrve with the Darkling, and that did not change after watching this show. I mean, yeah, he's a villain, but at least he was interesting and seductive, and it doesn't hurt that Ben Barnes is really good in this role, because he's kind of, um, beautiful. (Honestly, EVERYONE was perfect in their roles, but the Darkling specifically has been cemented into VILF status with this casting and portrayal.) They've named him General Kirigan in the show, just so he'd have an actual name--they don't actually use the term "Darkling" very often in the show itself, but I mean, it's clear who he is. Even having reread all the terrible things he's done and having watched it onscreen... I can't help it, I'd still go into a dark hallway with the guy.

The side characters were awesome, and particularly, I LOVED seeing: Fedyor, Genya, Zoya, and Baghra (aka, Madame Hooch from Harry Potter!). I felt like the visual world-building was spectacular, and I absolutely loved all the other Grisha and their keftas, and seeing how they used their powers. I thought the effects would be kind of cheesy, but I ended up liking it a lot. And the VOLCRAS! They looked like something out of Silent Hill.

Overall, I felt like the show really did the books justice and then some. In fact, I would venture to say the show was even better, in some respects, because it improved upon some things that I definitely was critical of in the reading. And I can't wait to see the next installment! In particular, we need need need need need to see Sturmhond. Please, Netflix, give us a season 2 so we can get some privateer adventures! 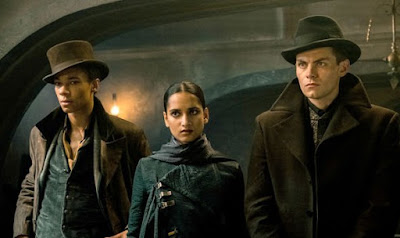 No mourners, no funerals

Interwoven with the SaB plot is the story of the Crows, which (for now) consist of Kaz, Inej, and Jesper. As I said above, this subplot serves as a prologue/prequel/whatever for the events of the actual Six of Crows books, and I'm really hoping we'll get to see the book story adapted as well.

I was more excited to see the Crows than I was the SaB characters--I think I did the hands-fluttering SQUEEing thing when they first showed Ketterdam and our beloved characters on-screen. All three actors cast in these roles seem to have leapt out of my head and onto the screen---I didn't think they could be any more perfect!

So, their story here is that they are trying to get across the fold into East Ravka to kidnap Alina and bring her back to Ketterdam, for a large sum of money that could pay off their debts and buy Inej's freedom from her indenture at a brothel, as well as shift some power and influence Kaz's way. I think the showrunners knew that none of us could stand waiting until we got through the entire plot of the SaB trilogy to meet the Crows, so I LOVED that they did this, because while the subplot and action were new, the characterization was perfect and spot-on. I didn't feel like any of it was weird or out of character, and it did a good job of showing their team dynamic. I love a good heist ensemble (see also: Leverage and Ocean's Eleven), and this did not disappoint.

I was extremely surprised by the introduction of Nina and Matthias and their history together. I'm not sure why I thought we wouldn't get much of them in season 1, but we got the full story of the two of them before the start of SoC (he is part of a crew of Fjerdan Grisha hunters, and Nina is captured by them, and the two of them survive a shipwreck and become friends, and then... a well-intended betrayal), and this ended up being one of the most compelling subplots of the show for me, even though (as my friend-who-hasn't-read-the-books pointed out) their story seemed pretty disconnected to the main plots of the show, which in hindsight I agree with. I loved seeing them, I have always loved Nina's character and the fact that she is a large-sized girl being unapologetically amazing. (Also, did anyone else feel like the actor who plays Matthias gives off some major Cary Elwes vibes? Anyone?)

The city of Ketterdam, as I stated above, was wonderful and bustling and exactly how I pictured it to be, dens of iniquity and all.

When I first read SoC, it surprised me how non-teenagery the story and characters were--this is not a sweet coming-of-age story about growing up, and every single character felt older than 16 or 17. This is how the show reads as a whole. No shade re: teen stories (you know I love YA), but if you didn't know this was a young adult series, you might not necessarily have sat there thinking "I'm watching a fantasy story about teenagers." (Even 13 Reasons Why, which is far darker and more disturbing, is a teen story, as it hinges upon high school and adolescence.) I feel like this was intentional, as I don't recall any mentions of age (I mean, besides the Darkling being like, 500 years old), and there are a lot of "adult" situations and topics (human trafficking, sex work, torture, murder, mentions of rape). Like, if I didn't know Kaz Brekker was supposed to be a 17 year old, I would not have automatically thought it by watching this show. (Alina in the books definitely feels like an adolescent girl growing into herself. I mean, that's kind of a big part of the plot, I guess--learning to reckon with her power.)

And I think it works. Again, there's nothing wrong with telling teen stories, but I think making it read as "general" fantasy and not specifically YA fantasy could help with appealing to audiences who think they're too good for YA, maybe? (Fie on those people, by the way.) And if you find it unbelievable that the Crows would be able to do everything they do and all be under the age of 18, I think that conveniently leaving out that information might make it more believable. (I personally feel that teenagers are as capable of being intelligent, skilled, and perceptive as full-grown adults. Sometimes more! *shrug*)

Okay, so... yeah. This was amazing, and I binged it all in 24 hours, and would for sure watch any and all future seasons now that I know what a great job they've done with it, so... GET MOVING, NETFLIX. GET THEM DONE.